Everything Is Coming Up Zardoz!  Day 6 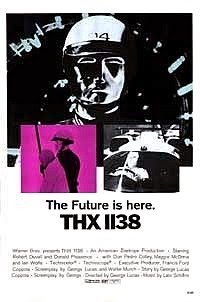 Like I say above I was really impressed with how well THX 1138 holds up to over 40 years later scrutiny. It may not be quite as capital ‘I’ Iconic as Star Wars (that’s episode 4 to the young people) but its pretty close. The look and the feel of it, have aged really well and the dystopia that is on display is in my opinion more realistic to today’s viewers than those of 1971.

Robert Duvall is the title character, a hazardous materials handler in a giant factory, he spends his days putting rods of plutonium into small spaces (think the opening of The Simpsons, like that) and at night he goes home to his apartment that he shares with a woman named LUH 3417... Everyone in this world has to take mood altering medication, sex is forbidden, work, home, eat food pellets, that kind of dulled sense dystopia that our own world is possibly o the precipice of. They make plans to escape to ‘the superstructure’ somewhere outside the city, where they figure they can live free. 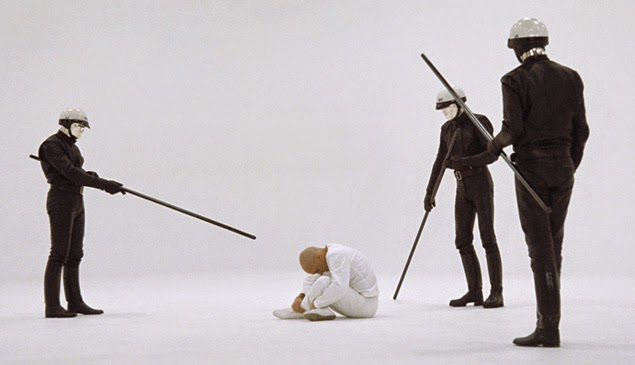 The perspective of the dystopia shifts around very nicely showing a bit of the behind the curtains, giving you backstory, and exposition whilst THX continues his story, LUH goes off her meds, and so does THX, they have some illicit (any) sex. They also have a voyeur in a super creepy Donald Pleasence as SEN 5421. SEN is a mid-level bureaucrat/security cam voyeur, who get LUH shifted to another apartment so he can be THX’s room mate. Stalking is a persistent part of the human condition, drugged out of our minds or not.

Eventually of course Duvall makes good his need to escape, and the chase that ensues is entertaining, and disturbingly prescient in terms of the value law enforcement puts on individuals. The corporate dystopia of this movie is to me chilling, as it seems not such a stretch from where we are now.

I watched this movie wearing my nice headphones, which is a real treat particularly, as the Walter Murch soundscape deserves to be experienced in full. The look and feel of the world, the bittersweet ending, all of it herald much of the Sci-Fi to come in the decades after THX made its debut in 1971.

I have watched this movie maybe twice before, and never liked it nearly as much as I did this time. The editing, the story are all tight, and things click into place just as they should, right up to the end. The actors all deliver striking raw performances. The otherwise unknown Maggie McOmie was this time around for me, at her best when she was silent, and emoting with her face, her whole body. From her IMDB profile, it seems this was her only feature. It's too bad, I would have liked to have seen her in more, based on this performance. Subtle and she holds her own with Duvall, who is not holding back either. This performance has moved up my Duvall rankings of his performances. Pleasence is at his creepy best with the smaller role that he has, the wanna be leader, the guy who in the end is all talk.

I really do think this is a better made film than Star wars. Tighter, less ‘explainy’ and yet it will never have the following. For a cineaste though, THX 1138 is a tasty treat, rather than a smorgasbord of archetypes, like Star Wars

8.6576 Silver faced android cops putting the boots to you outta 10

That is the end of my “Everything is Coming Up Zardoz!” Solo Film Fest. Today I am going to see a New Release in the actual movie theatre, apparently a great scary movie, so you probably know which one. Look for that tomorrow.

I do want to keep blogging in this space after that though, so I think I will have at least a day or two of quick TV show reviews, a book review (from my goodreads page) and some comic book reviews from this Wednesday’s haul. Next weekend I am going to start my next solo film festival, which I am thinking of calling “Easy Riders & Inland Empires.”  It will be an Existential Solo Film Fest. Lots of films from different genres, and cultures. One Director from the Sci Fi fest will get a film there too. Watch the skies!