December 23, 2016
Glib Reviews of Movies people have been telling me to watch all year.

The Lobster
- Directed by Yorgos Lanthimos

Since this came out like a year or so ago, everyone who has seen it, and knows me has been telling me how much I would like it. Thus as a master Contrarian, I haven't been arsed to watch it. Really just have not been in the mood for it, or something. But after watching the Super Hero filled Captain America the night before, I needed an art film palate cleanser.

The Lobster was as tasty as an actual lobster. I'm a pretty big fan of director Yorgos Lanthimos' previous film Dogtooth, which was one of those pictures where the absurdity is what is riveting, it real but it's not, it's mundane but it's not. Like the best Fassbinder films, this film is about nothing, sort of.... a middle aged guy whose wife leaves him, and because of the particular dystopian society he lives in, he's forced to go live in a hotel an find a new partner. If he doesn't do so, he gets turned into the animal of his choice to live out his days. 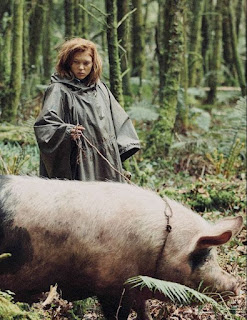 The creepy as heck conceit of this conceptual sci fi movie is that everyone must be coupled, or face this harsh system where you either find a mate, or in some unexplained and never shown way, get turned into an animal. Farrell's character David, has his brother Bob, recently turned into a dog, with him as the real proof of this.

This movie is so delightfully twisted, everyone is desperate in their own way, most of the people are so damaged from living in this scary to any of us who have accepted being alone world, that they don't really know how to 'couple', focussing on things like both of them being short sighted, or liking certain foods, as enough proof they they should be together. 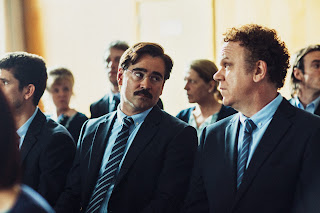 The movie is the mutant offspring of Bunuel and Fassbinder. For many folks, I think that qualifies the film as silly and pointless. For myself and those who love those directors this is a welcome change of pace from paint by numbers blockbusters and Woody Allen-esque rom-coms. I don't want to give away any of the smaller plot points or turns, other than to say there are some great twists and turns as David finds out that people are worse than the systems they choose to live in. That 'freedom' is pretty frigging relative. Great picture, that writing about makes me want to watch again.

9.3333 dance parties where everyone is an awkward wallflower outta 10