December 22, 2016
Glib reviews of movies finally on the Netflix

Now this is an Avengers movie. Everyone is petty, even when they are owning up to civ casualtiesYes it's a very paint by numbers but extremely well paced comic book story, that makes the most of it's two and a half hour running time. The Story would be over in two issues of a comic, maybe three or four with certain modern writers more prone to giving their artists quirky dialogue and sex jokes than punchy punchy scenes.

So much punchy punchy in this movie, and better choreographed than most super-movies, with the jump cuts that make the fighting seem fake (ask Jackie Chan about this, wide shots are best for good solid action that makes people wince in pain. jump cuts just scare you.) Any who, like all good comic book team ups, the heroes spend most of their time either having a punchy misunderstanding, or they are tricked by a villain. this movie has both. Most of the heroes get in some good zingers, which is also half of what makes a typical comic book, zingers. fun dialogue. 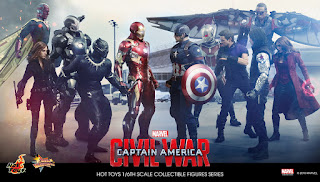 And as is proper and true all the best zingers come from your friendly neighbourhood Spider-Man. Spidey is and always has been the best of the zinger tossing heroes. And in the big fight scene at the airport, he steals the show. He also benefits from the best single decision ever made in any Marvel movie, Spider-Man or not. 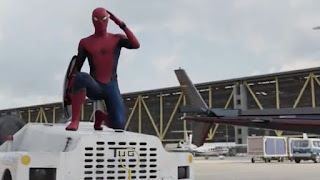 He has a Queens accent! Genius, and something that wouldn't work in the comics really, but of course Peter has a nice New Yawk, accent... he's no character in a Woody Allen movie mind you, but unlike everyone else who isn't a villain...in the film except the android, who sounds like he from London, Spidey sounds like he is from somewhere. Every other hero including the Russian spy, sound like they are from television accent land. flat. This brings a whole new dimension to Spidey, who has been my fave character since I was 5 years old. That does not happen every day. 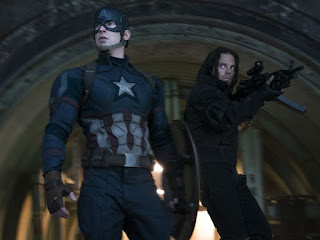 Which brings me to a point they reinforce, but don't use to advantage with Cap and Bucky (Winter Soldier) these are guys frozen in time after being native Brooklynites beforehand, without the exposure of television, not even a trace of old school 30's 40's Brooklyn accent, just a hint would be all you need, not a caricature, just subtle, like Tom Holland achieves with Spidey. Holland btw looks like Tobey Mcguire, and Andrew Garlield made a clone from their dna. just sayin.' 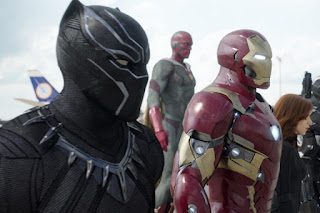 Oh and a shout out to how The Black Panther was brought in, and hints given about his upcoming movie. Great addition to the movies, I think if it can be as cool as his character is in the film, it will be another winner.

An enjoyable romp of a movie, that gave me lots of nerdgasms, and took the right kinds of liberties with characters i love to translate them from comics to movies, which really are different mediums. No comic book inspired movie will ever live up to my favourite comics, but they don't have to.