Trying to do these quick glib little reviews more often, leading to eventually some more feature kind of writing on comics, maybe including some dissection of my own brief tenure as a cartoonist. also podcasting. watch this blog for more info, as I figure out what I am doing.

This week in comic book panels... 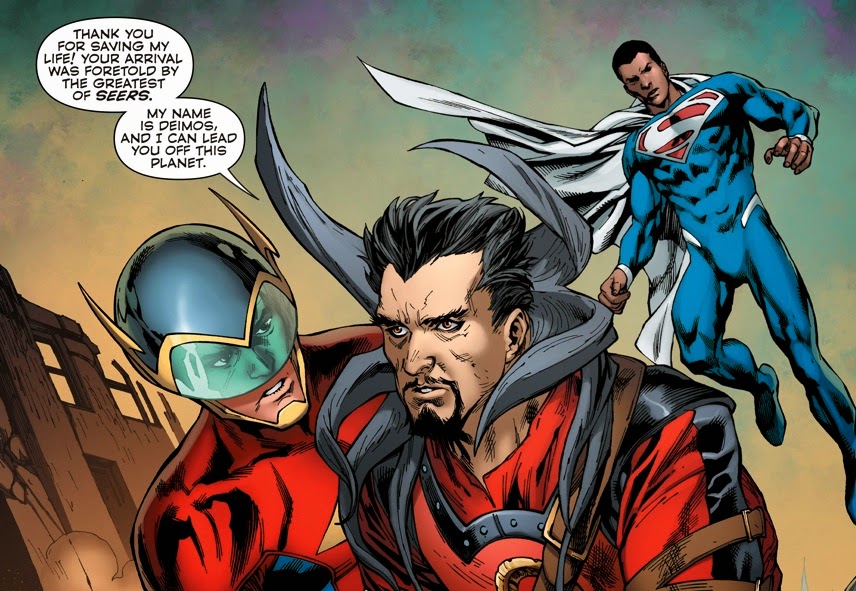 First up are the Convergence titles the main title improves a lot by just focussing on some heroes teaming up, dealing with the setup of their last crossover, and the painful transition issue # 1. This panel right at the end makes me happy, Deimos! can Skartaris be in the mix? please let warlord come back, and if I can't write it, give it to someone good. 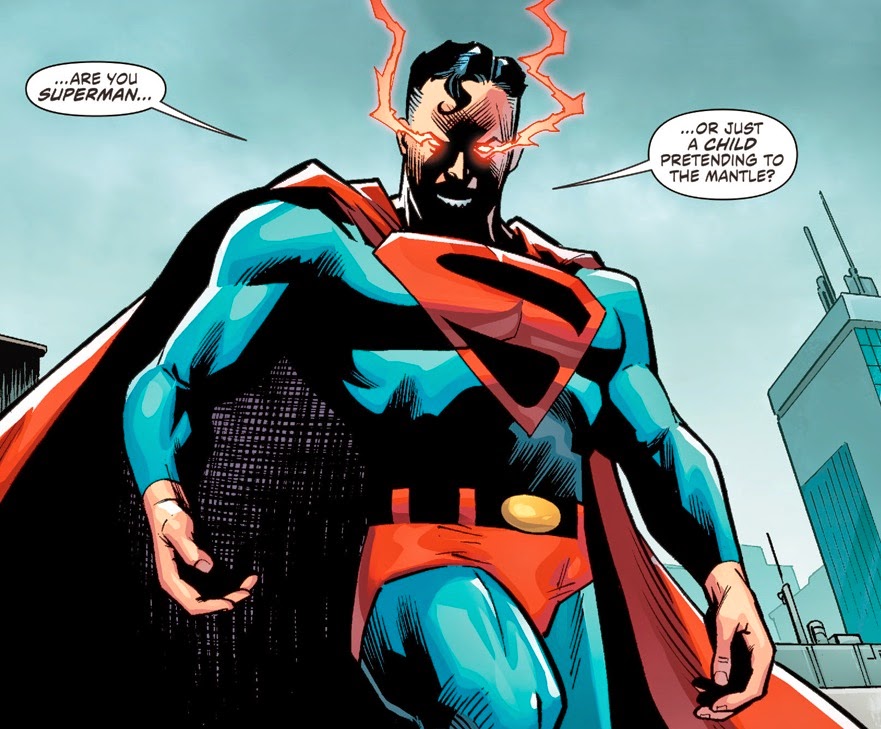 Kingdom Come Superman trash talks Young Justice (the comic) Superboy. in the Convergence Superboy issue that was pretty enjoyable, capturing the fun that that version of Superboy was. 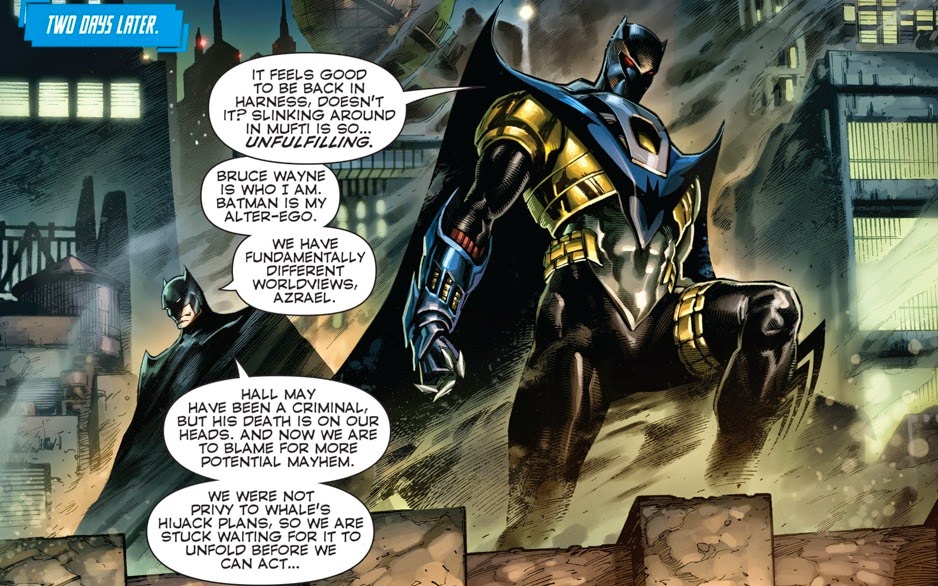 In The Azrael Convergence title "Shadow of the Bat" really you can't say it's not brokeback Batman and Azrael, because it is, as the broken but on the mend Batman teams up with Azrael to take down forgotten silly but memorable Kingpin ripoff Tobias Whale, before getting to the fighting other heroes stuff happens next issue. thus by avoiding the gimmick, a nice 'what if' story. I never dug that whole Azrael thing that much, but this makes me want to revisit it... 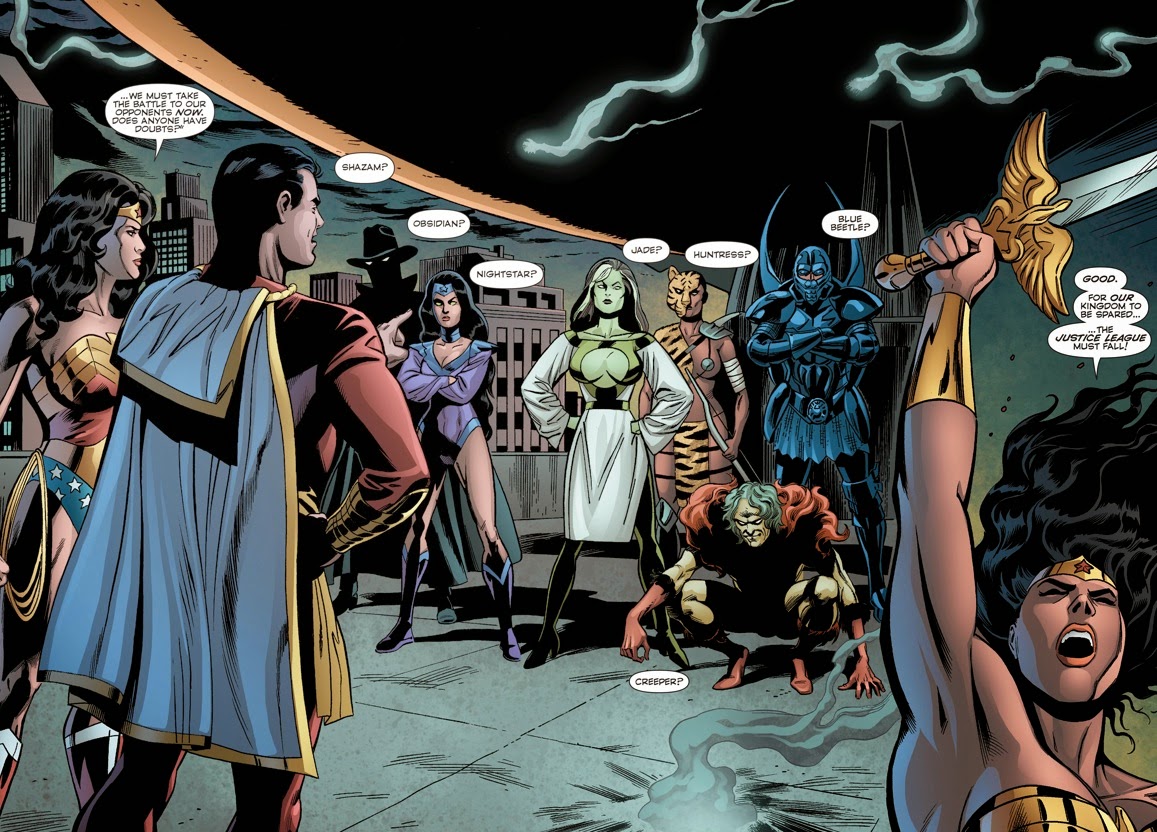 Convergence JLI was also pretty decent, as we get a bit of Bwahahaha, and some grimdark old battered kingdom come jla to boot. 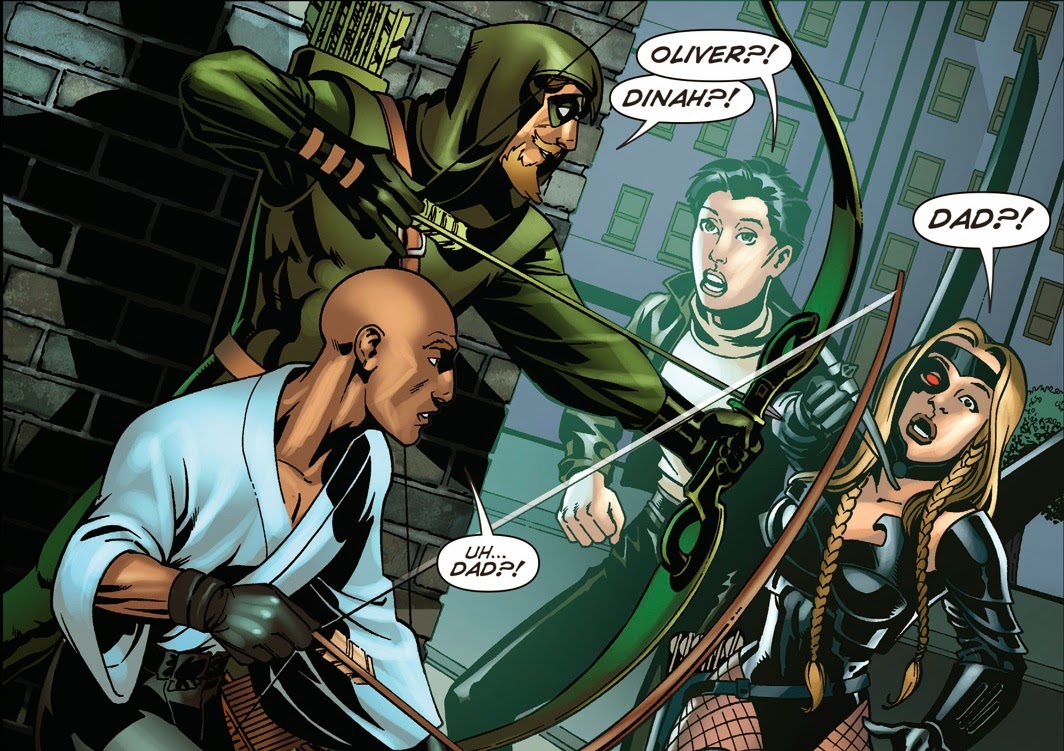 Convergence Green Arrow warms my heart. this is my favourite iteration of GA, with Connor Hawke, his son, training to take over... and a more street level Ollie, who has that Ollie personality developed since the 70's that disappeared in Flashpoint. He's a 'hound' he's a Liberal, he's funny, he's not the TV arrow, which I don't mind. Make Ollie fun again, though I say. Here he meets some old friends but not. So definitely a better week for Convergence, for my money. It was nice to see Peter David's Supergirl again, and pony tail Lex, but I have too many panels as is.

Some great silly comics with a trippy edge from Archie's Dark Circle imprint With Issue #1 of The Fox, who back i the golden age was even more psychedelic than in this current incarnation. Great take on a weird old character. 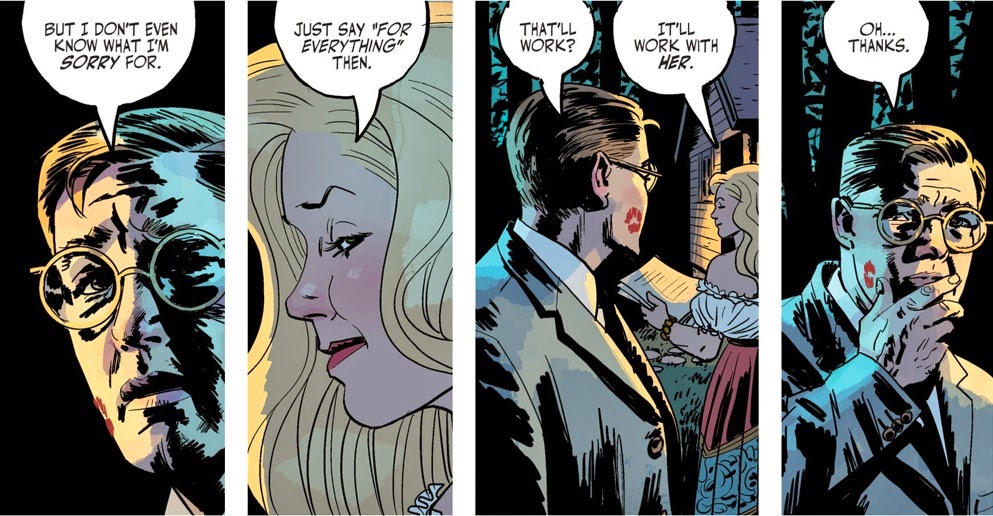 The Fade Out is again one of the best comics of the week, textbook noir writing with groovy art. If you like LA Confidential type fiction, this is as close as you get in comics form. 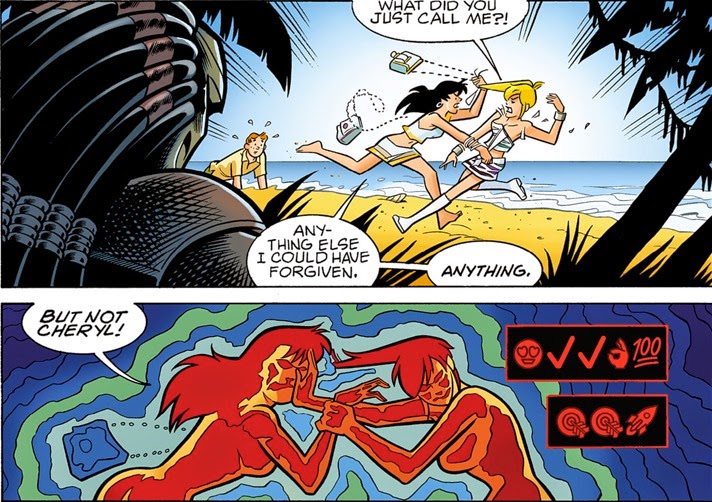 Archie Vs. Predator is one of the best comics of the week, great suspenseful issue with a cliffhanger. Archie may be 'cooler' than their comics ever have been, these days. 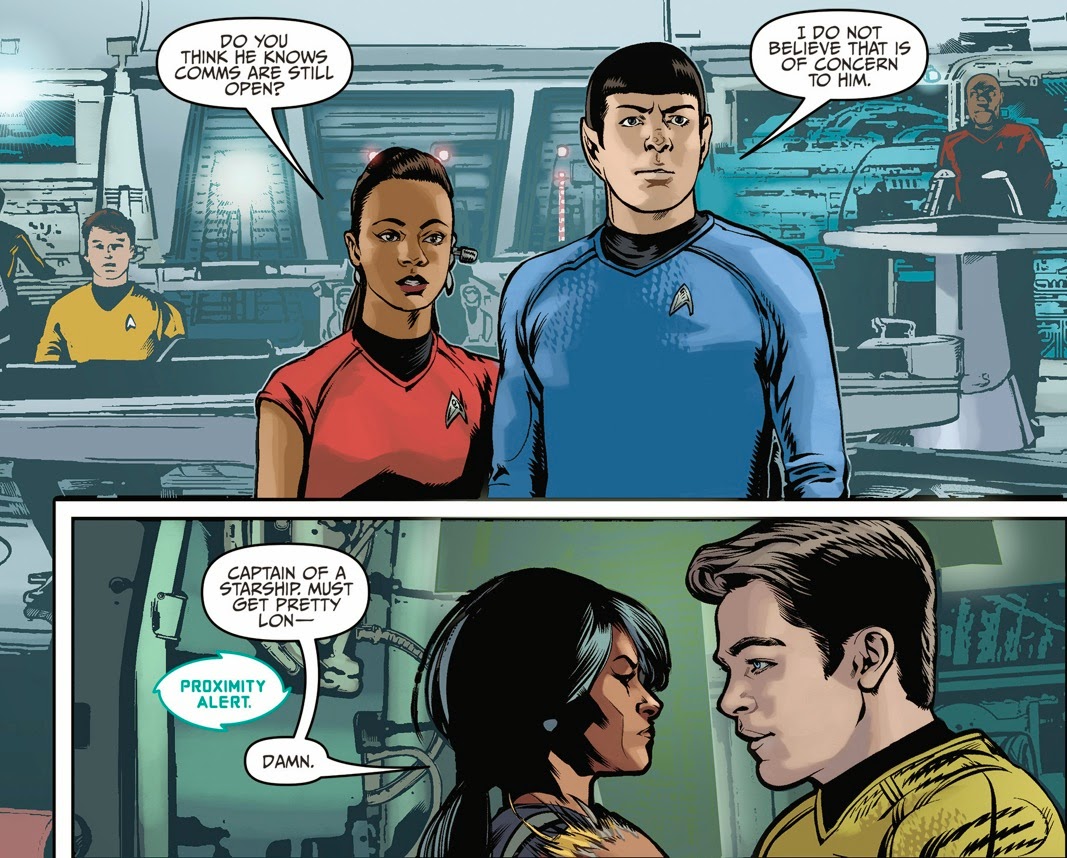 Lost in the whatever quadrant with no dilithium arc of the ongoing "Star Trek" with the new cast comic. I like this story, it has a good OST vibe, despite the new faces. This comic is up and down. currently up. 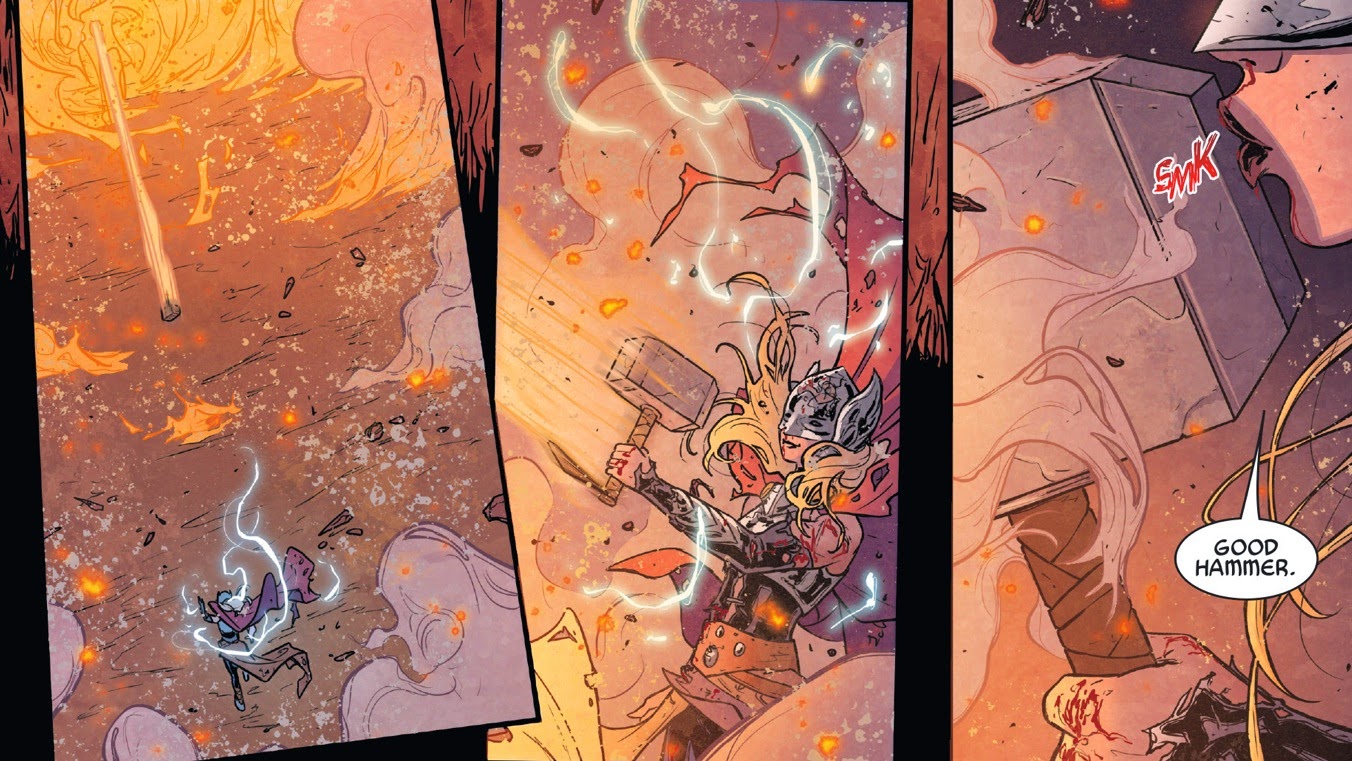 Thor... stretching out who is the new female 'Thor' as long as possible, but giving us some nice character building moments along the way. There have been a lot of great Thor comics in the last 4-5 years. seriously, way better than the movies. it's a Thornaissance. 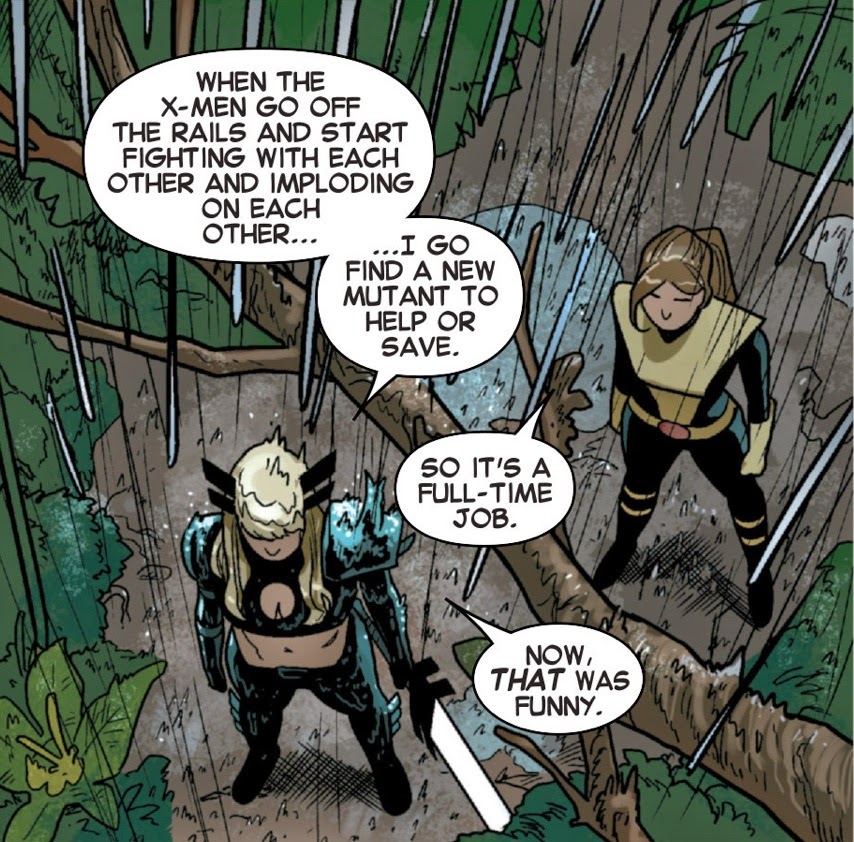 A rare 2 panels from one of my favourite single issues of an X-Men comic (Uncanny) with some great Magik/Kitty Pryde moments. I like the characters acknowledging their long intertwined history, and having some realistic people who have been around each other too much dialogue. 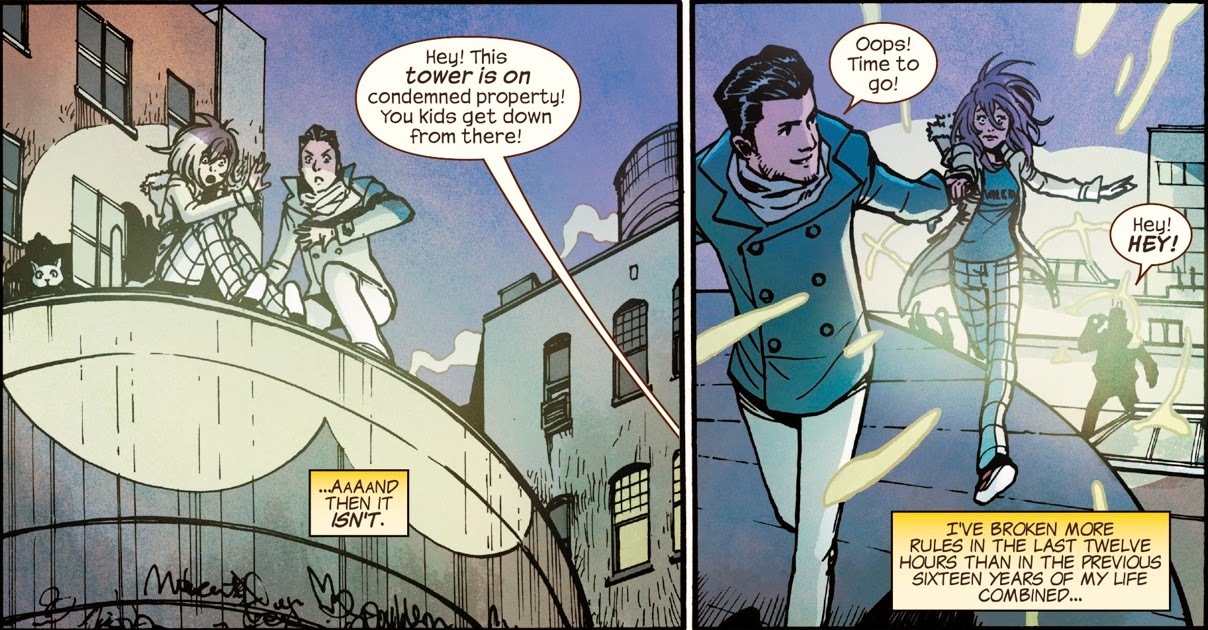 Ms. Marvel continues to easily be the best mainstream thing out there. cute, yet suspenseful. hitting it's stride, this comic.

New issue of Secret Identities. I am really liking this riff on the "Terra arc" from the Wolfman/Perez Teen Titans. An interesting team of characters, that you are already sold on a couple of issues in. good solid old school comics. 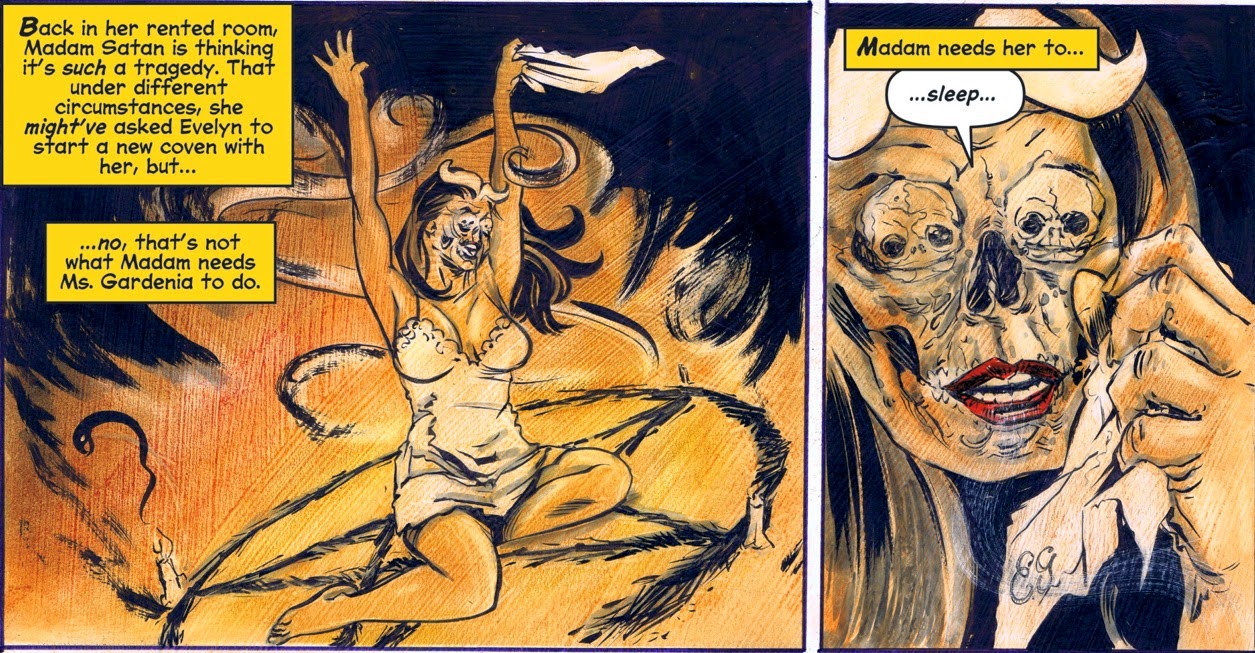 More Archie Comics Dark Circle? sort of, this is not your grandmother's Sabrina The Teenage Witch, nor is it your mom's... solid witchy horror comic more evocative of old 70's Charlton horror than anything.

Hexed takes an interesting turn after the game changing events of the last few issues, The Intern still isn't getting paid, but she's earning her keep, as is her pal ghost kitty!