Everything Is Coming Up Zardoz! Day 4 (another double Feature!)

Everything Is Coming Up Zardoz! Day 4

After a mid festival break so I could go to choir rehearsal, I got back on the 70’s Sci Fi wagon last night, which this time was filled with cheese, oh so much cheese, and some disturbingly relevant to the culture of today observations from two very culty Sci Fi flicks from the 70’s. I wanted to write: “Ye Olde 70’s,” just then. Who am I? Stan Lee?

John Carpenter’s not nearly as dated as you remember Dark Star, and the Disney Film everyone remembers as one of the worst of their childhood, isn’t/they aren’t so terrible, not at all.

But let’s get on to the actual Reviews, True Believers! 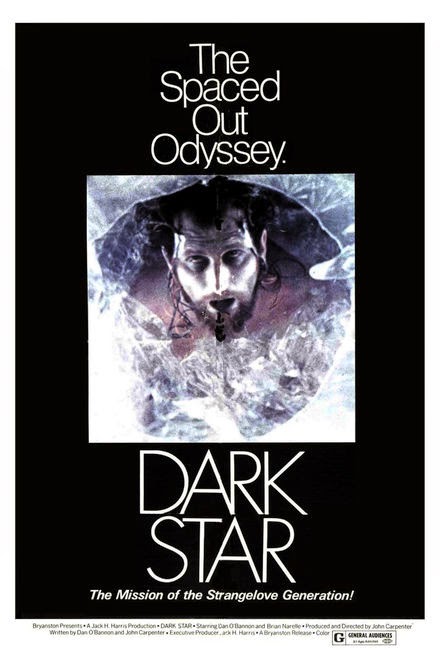 It might seem too obvious a choice to pair a film called Dark Star, with one called The Black hole. It is indeed an apt pairing. I had quite an enjoyable evening of cheese and humour, as well as some great cornball low budget fx (Dark Star) and some gorgeous hand painted matte work, and insanely detailed practical spaceship model work in The Black Hole.

But Dark Star was first. Here’s an interesting fact: this is one of the few John Carpenter films I had never seen. I know, right? I think I may have convinced myself that I had seen it way back when and just forgotten. But after last night’s viewing, I feel like I really had not seen it. The first thing that struck me is that the hipster bearded bros that are the cast of this movie really, really are some kind of proto hipster beardo bros.  I think they are meant to be portrayed as regular hippy/outsider types. From the uniforms they wear, to the poor grooming and the stoner yakkety yak, these obscuronauts could blend into the world of 2015 pretty easily. 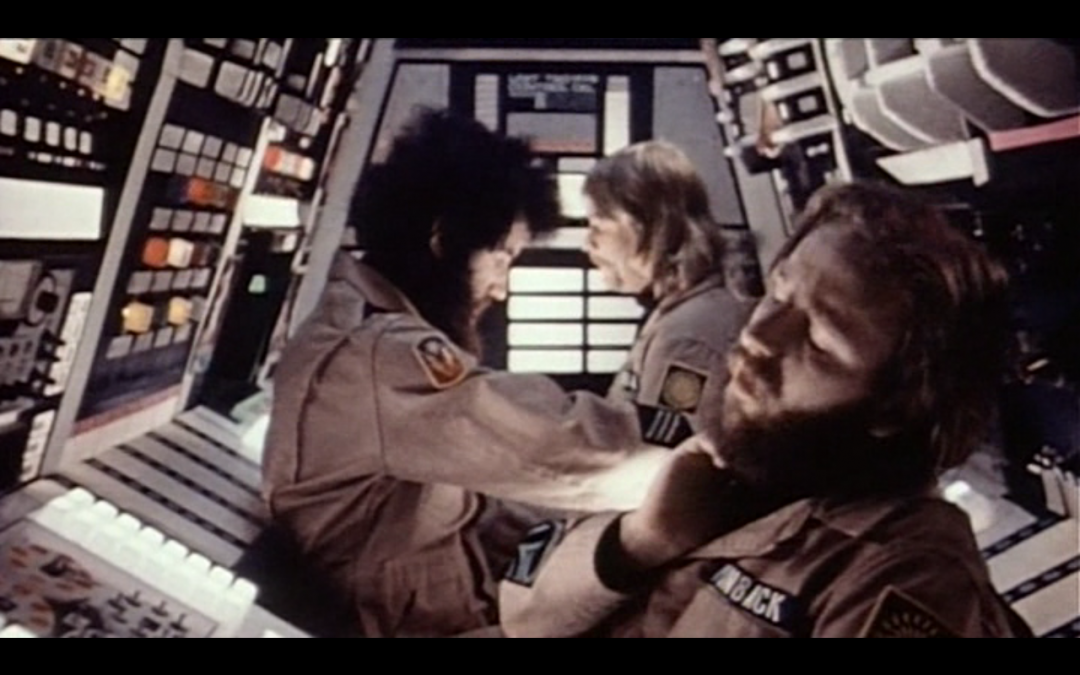 Hipster Bros, who have spent decades (but only 3 years have passed somehow in earth time) hunting down unstable planets and blowing them up. Now, there’s a job for humans in space: find planets that have a chance of ‘becoming unstable’ in the next 10-12,000 years, and blow them up because, human. 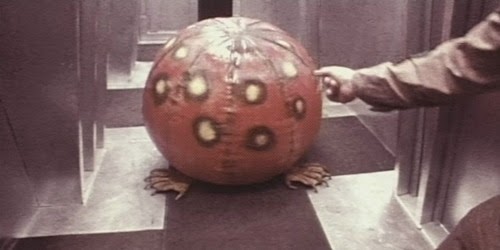 The film itself is a lovely lesson in how to make a classy sci-fi movie with the cheapest possible special effects. Carpenter’s ever present hands on the synthesizer fits the space vibe, and even the big hyperspace scene, someone drew or scratched the ‘movement lines’ right on the celluloid! Making do, with what you have is the real special effect on display. Many of the ideas resonate as clever and funny over 40 years later (holy crap 40 years!) The way the crew interacts with the various parts of the ship, each part seeming to have its own intelligence. 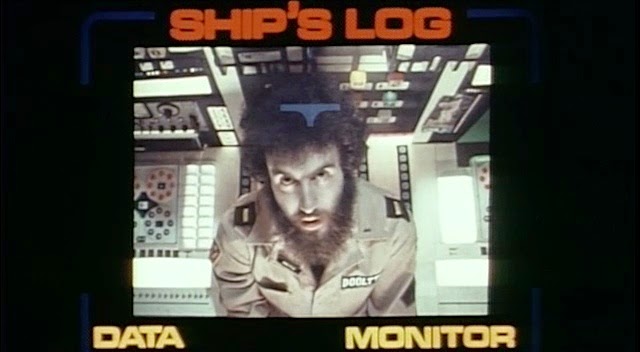 There is a whole scene where the Lt. teaches a bomb about phenomenology, so that it can figure out that it shouldn’t explode yet. Genius! The whole story of Sgt. Pinback (played by screenwriter Dan O’Bannon, who also wrote the best space suspense movie of all time. ‘Alien’) is classic Sci-fi kind of accidental hero, often found in an Alfred Bester story. Pinback really isn’t Pinback, and he tells everyone over and over, but everyone has their own thing going on, and stopped listening to his stories years ago.His whole awkward adventure with the best beach ball shaped alien in film history is quite funny, and in the end, sad. The film is mercifully short coming in at a reasonable given the lack of story, 70-75 minutes or so. 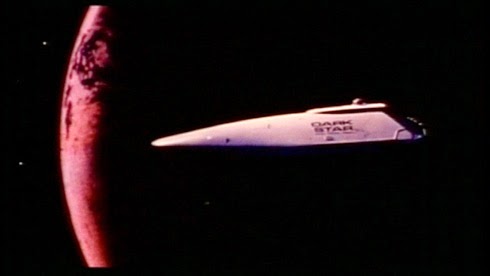 There are some lovely scenes, a lot of funny scenes, hipster beards, surfing stories, and the galaxy’s quippiest bomb. I’m not sure what else you need for a fun Sci Fi feature. If you are looking for some intricate story, or great fx, look elsewhere, but if you want to watch some hipster bearded bros surfing the atmosphere,and saying funny things straight out of Tim & Eric, this is your movie. I enjoyed it very much, and am kind of glad I missed it ’til now, I think it might have felt dated 20 or 30 years ago, but now, not so much.

Ron Moore I think learned a lot from this screenplay. Characters over story. It works sometimes.

9.0111 Duck Footed Alien Beach Balls that try to tickle you to death because you are mean to them outta 10 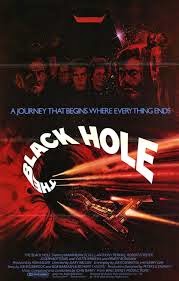 The Black Hole is a movie that I definitely had seen, and remembered that I kind of liked it, but hated the dorky robots as I saw it when it came out when I was 14 and trying so hard not to like anything too ‘cutesy.’ Also I have always found Roddy McDowell’s voice kind of grating. Roddy voices Vincent, the smart mouth robot who the crew inexplicably love. He does do a lot of saving people, and killing evil robots, but that voice... still kind of nails on a chalkboard for me. I also hated the Bob robot’s voice back then which was an uncredited but instantly recognizable Slim Pickens, who’s folksy aw shucks voice also really grated on me, when I was a kid. Less so now, as I have grown to appreciate Pickens a bit more than I ever have Roddy McDowell. You can’t love every actor. 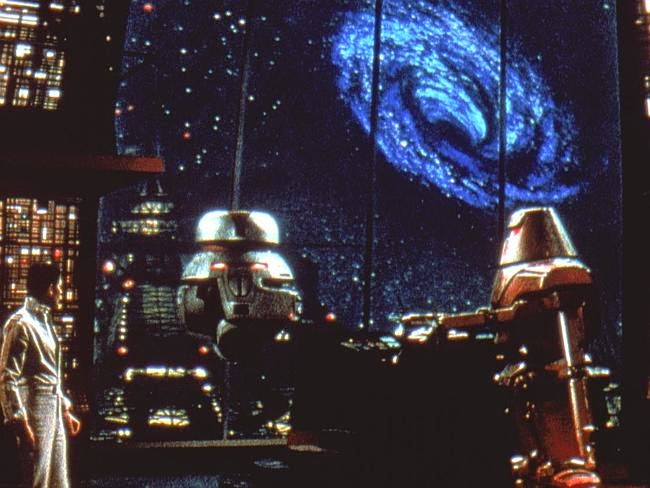 Aside from that bit of bad memory that stayed this time around, I enjoyed The Black Hole much more this time around. Mostly because of Slavoj Zizek, I mean Max Schell, who seriously is channelling Zizek from the future the whole time. This is obviously a modern connection to be made watching the film, and it gave me the giggles every time Schell had one of his grandiose monologues, which were easily the best bits of dialogue in the picture. I can’t get the idea out of my head. Anyway the story itself is actually an interesting take as far as the details of it go, but less so the plot. 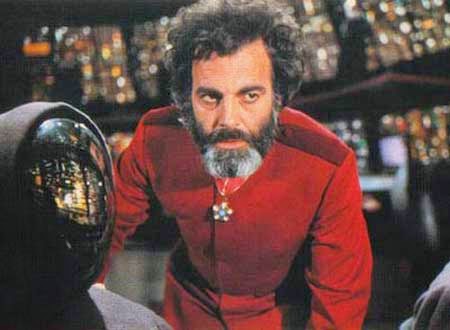 The small ship Palomino finds the ‘lost’ spaceship ‘Cygnus’ while exploring space. they investigate, and find that the Resident mad scientist Hans Reinhardt (Schell) has kept the ship alive and working, by developing anti gravity tech powerful enough to keep the ship from being sucked into the nearby biggest Black Hole ever. He also has a lot of dangerous looking robots, and mirror faced drones who seem almost human. The design and look of the cygnus is just gorgeous, the matte painting on display is something never to be seen again, with everything all cgi now. The ship has a super creepy vibe. 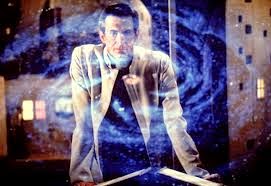 Everyone except Anthony Perkins as the Palomino’s civilian science guy, Dr. Alex Durant, who is enamoured of Reinhardt’s genius, and totally sucked in the the hot air world conquering monologues. Robert Forster does a first rate spaceship Captain, he has a young go-getter first mate, there is an ESP officer who only ESPs with the robot Vincent (ewww) it seems. All the crew cliches are filled, the evil robots, who don’t speak, mercifully and are more sinister for it.

Of course everything goes awry as the crew of the Palomino want to leave before Reinhardt makes his fateful journey into the black hole, where he seems to think his genius will protect him. The finale is a bit clunky exposition wise, but has some great ideas around the mirror faced drones, and the various theories about what going through the black hole would really be like. There is a pretty decent for the time meteors colliding scene....

The very ending, though was a nice change of pace from the usual Disney need for coda and wrapping of things up in a happy ever after bow. 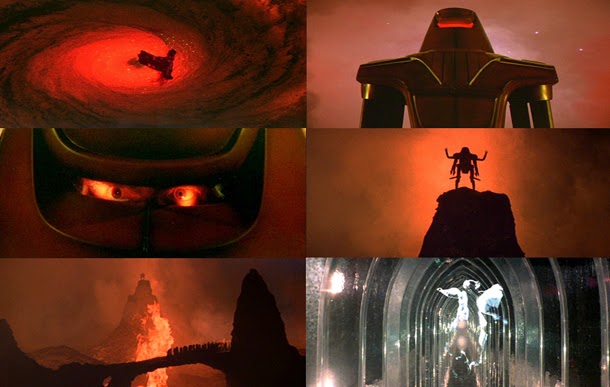 Some clunky dialogue and unneeded sidekicks are the only drawbacks for me in this entertaining and definitely mostly under rated Sci-Fi movie. The practical effects, the models, the matte paintings, only surpassed in 70’s sci fi, by Robert Wise’s also under rated Star Trek the Motion Picture. I recommend this to geeks of all ages, as a fun if occasionally clumsy movie. Some of the concepts could really be updated and this is something that could be a fruitful remake, movie, or better yet a ‘Lost’ but in space tv series.

7.5 Mad Scientists who look and sound eerily familiar getting crushed not so ironically by giant TV monitors.