Day 3 of everything is coming up Zardoz! soviet style.

Everything Is Coming up Zardoz, Day 3

Well, I took a left turn on day 3 of my little solo 70’s Sci Fi festival, and watched a 70’s Sci fi art film. My previous entries have had the odd bit of artsiness, sure, maybe even a bit of pretentiousness. But none of them are Russian, so.... Yes, I am talking about Solaris, not the ‘remake’ with Clooney, which isn’t terrible, but Soderbergh ain’t no Tarkovsky. Nobody is. And that is a good thing. Tarkovsky, I came to, later in life. I never saw any of his films until I started working at video stores at the turn of the millennium. I’d read about them quite a bit, but had never rented any, or gone to an art house. The first one I saw was Solaris. Billed on the cover as the ‘Soviet 2001’, um well maybe. Solaris is obviously not in the same budgetary genre as 2001, and aside from the fact that they both have themes of isolation and identity at their hearts, the comparison is a disservice to both films.

Solaris is really not a film for anyone whose idea of pacing involves car chases and jump cuts. I have sat through many a 3 to 4 hour film, with nary but the odd pee break more times than I can count, but even I get hypnotized by Solaris’ quiet brain melting and doze a bit once in a while. I did last night, and probably, the first time I saw it as well. Unless I fall right asleep and miss a large chunk of a picture, I pay that no mind. Some films lull you into becoming part of their dreamy worlds. This time through actually, what I noticed was that it did seem a bit clunkier than I had remembered. Only Tarkovsky can film paintings of peasants hunting for 10 minutes in a Sci-Fi film and have it be riveting.

The bare plot  from the IMDB: “A psychologist is sent to a station orbiting a distant planet in order to discover what has caused the crew to go insane.”

Yeah, that really is all that happens. What the film really is about though, is ‘the creature’ or ‘the ocean’ or ‘the guests’ that visit the dwindling crew of Earthers stationed on some unnamed distant world. The sort of jarring beginning gives you a very Soviet kind of trial or enquiry into what exactly it is about the world they are visiting that seems to be affecting the astronauts, or cosmonauts perception. One pilot avers that he saw a giant 10 foot tall baby, and trusting his senses, has a hard time with the various science bureaucrats who tell him that some unknown phenomenon, or being, something alien is altering what is real to him, versus the objectivity of the camera he had with him, where we see, sadly, no giant babies.

Kris is the psychologist friend of the pilot, and a Solarist, or scientist who deals with the psychology of these unexplained phenomenon. Have they made first contact, but don’t understand. It really does seem to be the case that these changed perceptions are some communication. Science Bureaucrats are doubtful, and send Kris to basically rubber stamp getting everyone off the crazy place.

Once he is there Kris meets the awesomely named Doktors: Snaut, and Sartorius (who really resembles Dr. Pretorius from ‘Bride Of Frankenstein’.) Kris has some spooky experiences, is kind of creeped out by his fellow workers, and diminished by their cynicism. Just then his dead wife appears. Of course he knows it is not her, but it really seems like it.

What I really enjoyed this time through, maybe because I am myself in Transition, was the faux wife Hari’s growth, realization that no she isn’t who she seems to be. She learns this or accepts it, faster than Kris, who is living a whole new level of grief by living with a shade of his dead wife on a space station light years from earth. She is not just ‘the alien’ driving them crazy, she is life being born from naught but memory, and melancholy. Holy Russian literature Batman. 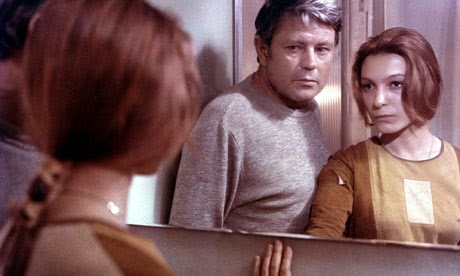 This faux Hari is one of many manifestations from the planet’s intelligence or life that creates itself from the memories of the people on board. This is a first contact movie where the humans can’t actually believe that the life is in fact life. Hari’s journey is the most interesting of them all because she has a constructed identity, yet is living, learning to function without the mind she was sprung from.

Some heavy stuff to chew on identity wise in this film. Not paced for modern viewers by any stretch, it is still a great film for those disposed to pondering a picture for days on end and discussing it with other fans. Thus it suits the cult-ish vibe of my little quirky 70’s sci fi fest. When it was done, I shrugged, and thought, yeah, good, but slow. As I started thinking abou my review though, I had so many things to write about, to discuss. I might have to seek out one of my former co-workers and have the higher level film chat that the film needs.

8.5 Crocheted shawls, dresses, and jackets that are eminently practical on a space station outta 10