Everything Is Coming Up Zardoz!

Most of the flicks I am reviewing are of the more obscure, or cultish variety, in fact. Not bothering to include Alien, Star Wars, or Close Encounters in this little fest. When I do these week long or so film fests of my very own, I am more interested in things I either haven’t seen, or maybe only seen once or twice back when said movie came out. I have seen maybe close to 10,000 movies, yet there are still thousands I haven’t seen. Some of which might even be decent flicks. Anyhoo, last night I did my first double bill of the festival, and was up way past my bedtime. If I do that again, I will start a bit earlier.

You know I am dedicated to doing this little self festival, when I chose to skip (and pvr-ing) watching my two favourite network tv shows last night, The Flash, and Marvel’s Agents Of S.H.I.E.L.D.

Last night’s pairing was the WestWorld Duology, as I like to call it. The very much a cult film ‘WestWorld,’ and it’s 3 years later sequel ‘Future World.’ I recall a tv show, from the era as well, but don’t recall what it was like, and don’t want to look really. The setups, and plots of both films though; I could easily see being translated to some decent sci-fi TV stuff, like Lost meets Fantasy Island. This is apparently underway, as a new WestWorld TV show is in production, with Ed Harris in the iconic Yul Brynner ‘Gunslinger’ role. That I like, but the proof is in the pudding.

WestWorld, I first saw as a kid at the Drive-In and it scared the bejeezus outta me. FutureWorld, I think I saw in a theatre as a kid, and hadn’t seen it again until last night. WestWorld, I have watched on tape, and dvd once or twice over the years. 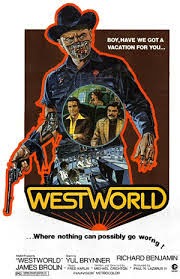 Director Crichton sure does love his theme parks of death scenarios, being the author of a few notable the theme park is going to kill you stories. WestWorld really is kind of a tryout for Jurassic Park. WestWorld also has a great 70’s vibe with the colour, and the cinematography of Gene Polito, who DP’d a heck of a lot of action packed tv, throughout the 60’s and 70’s, and one of my favourite baseball movies of all time: ‘The Bad News Bears Go To Japan.’ WestWorld also has a relentlessly suspenseful score (Fred Karlin) that helps keep you on the edge of your seat, as the ensemble cast finds things edgier and darker as the film goes along.

Richard Benjamin was much better than I remembered,
as the nerdier of two buddies on vacation, James Brolin as John Blane, is the handsomer, more experienced having been to WestWorld before, and maybe the expected lead, but ultimately he becomes the sidekick to Benjamin’s Peter Martin, who is really the only character with an arc, really, which is just fine. 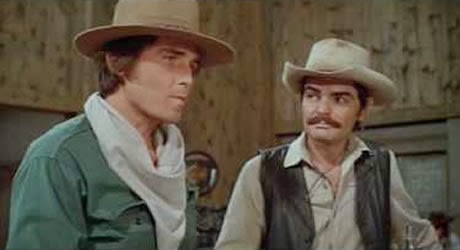 Hats doffed to a barely recognizable Majel Barrett (of Star Trek renown) as Miss Carrie, and Dick Van Patten as a mousy banker living out his wild west fantasies. Alan Oppenheimer (best known to me as Ming The Merciless from the Buck Rogers TV show in the 80’s, and the voice of Skeletor, on He-Man... he did a lot of voice work in tha day) does a great job as the harried Chief Supervisor of the park, that keeps having more and more dangerous things happening to and around the clientele.

The pace of WestWorld is dynamite, the action rolls on quickly, giving each character a bit more danger every time we see them. Many people think of this movie as Brynner’s film, and in many ways it is. He is chilling right from the get-go, in a very creepy self parody almost of his ‘black hat’ in ‘The Magnificent Seven’ and ‘Invitation to a Gunfighter.’ His stiffness seems robotic, yet very human, his eyes glint like metal, and every time you kill him, he comes back for more.

In the end he is as relentless, and seeming un-killable as any Terminator, or Alien. He is steely eyed death personified. I have never given Richard Benjamin much credit as actor before, but he brings his ‘A’ Game in this taut little thriller. You feel his fear of the ‘Gunslinger,’ and are completely with him as he runs through the theme park trying to survive.

One thing the plot does, that also happens in the first Jurassic Park movie is that the staff of the place are not in on the evil that comes from this apparent computer virus of evil, that has the robots injuring and eventually killing guests. 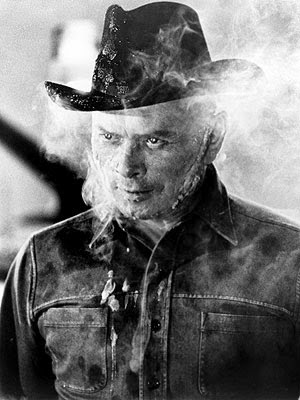 The techs are desperately trying to fix everything, and are victims of creating ‘new life’ and mixing regular folks in with it. This tension that everyone is in danger, from the park itself really adds to the story and gives it a bit more gravitas that it might if it really was just about “the Gunslinger’ robot hunting down heat sources to kill. The FX and cheesy retro sci-fi look of the film holds up really well, as it’s very consistent, and believable in the world that we in lived in back in the 70’s.  Well done 1970’s. well done. 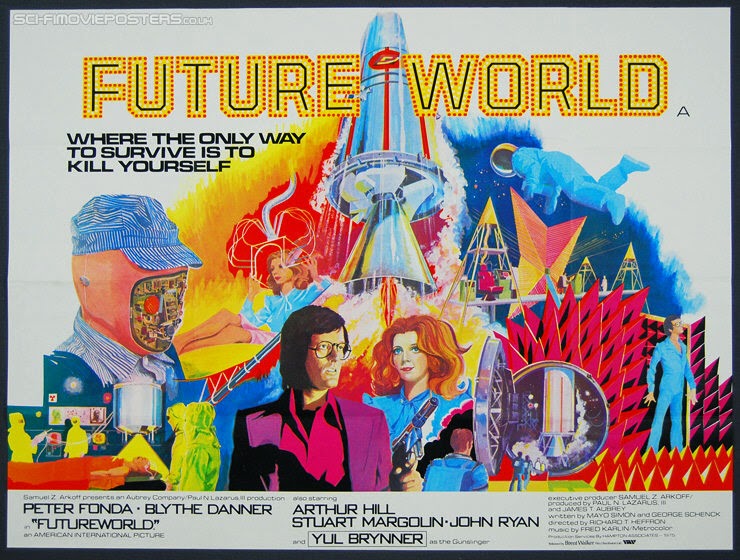 Three years after WestWorld, a sequel, FutureWorld was released to mostly tepid reviews. And well, it’s not a terrible film, in my opinion, it does not really have any of the tension or chutzpah of it’s much darker predecessor. Peter Fonda plays a news reporter who has to team up with old flame and now TV reporter Blythe Danner (unfairly more famous for being Gwynnie’s Mom, than the breezy light hearted comedic actress she was back in this era.) Chuck Browning and Tracy Ballard are their likeable names, and they are a reasonably likeable sleuthing pair, like proto Moonlighting or Remington Steele, except with more elbow patches and endless pantsuits. 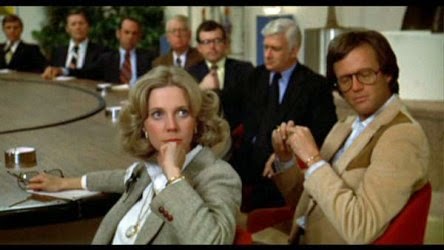 Browning had covered the massacre and closure of  Delos (in myth, the birthplace of Artemis and Apollo), the ominously named Island where the first movie and this one take place. He gets a tip from a Delos maintenance worker named ‘Frenchie’. that the place is open again, and that something bad is going on again. Fonda goes to meet the guy and ends up finding of course, that Frenchie has just now been fatally stabbed. Fonda takes a folder of clippings about world leaders who have visited Delos.

He charms/coerces Danner, or ‘Socks’ as he calls her; into doing more than a puff piece on the revamped park. So they and some bit players dressed as dignitaries hit the island. the new Delos is a bit upgraded, though the style is a bit less groovy, despite the ‘FutureWorld’ that they visit at the beginning, simulating a quick trip to Mars. The dialogue is not as crisp by half as Crichton’s, though the plot perhaps is a bit more complex. this time around it seems like the Scientists and technicians are the ones plotting and doing weird things to the clientele. 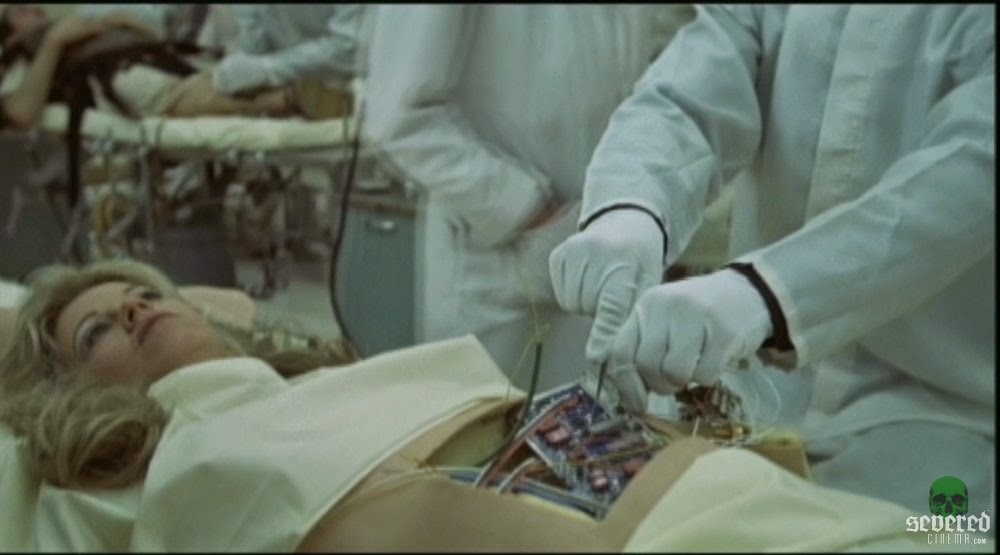 This is where the story falters, despite some great creepy moments from tv veteran John Ryan as the less than social Chief technician Dr. Schneider. You know he’s a bad guy right away. The script though doesn’t give you any ambiguity about who is up to what, and it’s all pretty paint by numbers.

There are some really good ‘trippy sequences’ including the weirdest dream sequence possibly to come out of an American film. Old Socks (Danner) lets the creepy scientists record her dreams, while Browning (Fonda)watches through a Mr. Spock styled viewing device. Of course she has a dream lover fantasy, but it’s the Gunslinger from WestWorld. Yul does a bit of dancing and sauntering, whispering nary a word. It’s a weird out of place sequence, A real nightmare, most of the dream, with images of the dirty deeds that the scientists have been doing to the reporters while they sleep. 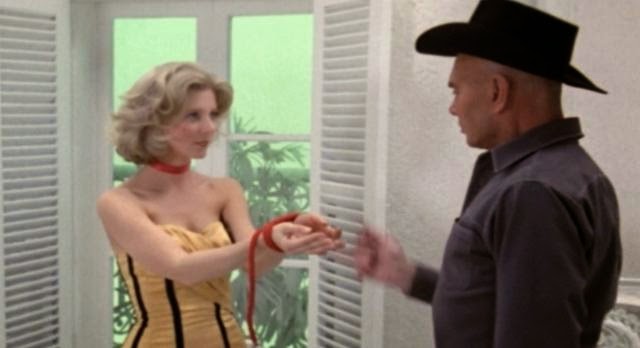 The chemistry of the leads is decent, but their dialogue is hammy, clumsy, and the plot is too rigid. They have to fight clones of themselves, that maybe aren’t robots, but androids, or clones, Danner fairs better stylistically, as her final ‘chase’ is short, and she gets better one liners to fling at herself.

What elevates the film at the end, is the way it ends. Peter Fonda making a gesture, perhaps to the film makers as well as the creepy Scientist, he flips Delos the bird. My rating of the film would be lower without that nice ‘screw denouement’ moment.