The Return of Josie's Comics panels of the week.

April 11, 2015
Josie's comics panels of the week aka Glib Reviews of new comics.

Originally I did a few of these comic book posts on this blog, then I joined a facebook comics chat group, and started doing them there. But now I feel like, since I am doing these anyway. maybe I should blog them.

***All artwork, etc obviously copyright the various creators and or companies, namely Marvel, DC, Boom, Image, Dark Horse, Valiant, and so on. I am using these images for review/homage purposes. I have no idea if that covers the copyright, but if anyone wants their art taken down shoot me a message and I will gladly do so. I am just reviewing stuff I dig****

So this week DC officially starts it's Convergence Event, which is exactly like Marvel's Secret Wars, but quirkier grimdarkier n whatever. as with all crossover/reboots some of it is dreadful, some meh, mostly meh, but with a few real gems. which really is all I ask from either Marvel or DC, a few gems among the 'born again' 'watchmen' 'ms. marvel-esque rehashings, etc. These crossovers both strike me as saying to the fans, here's a bone, your fave versions of characters from whenever battling your other faves from wherever. don't say we never gave you anything the next time we destroy your childhood with a reboot.

Convergence Batman & Robin Mini: is Snyder Batman (the current 'new 52' Bats, his Gotham, Damian, and his Dr, Freeze etc . the thing is all played a bit tongue in cheek, and is better for it. 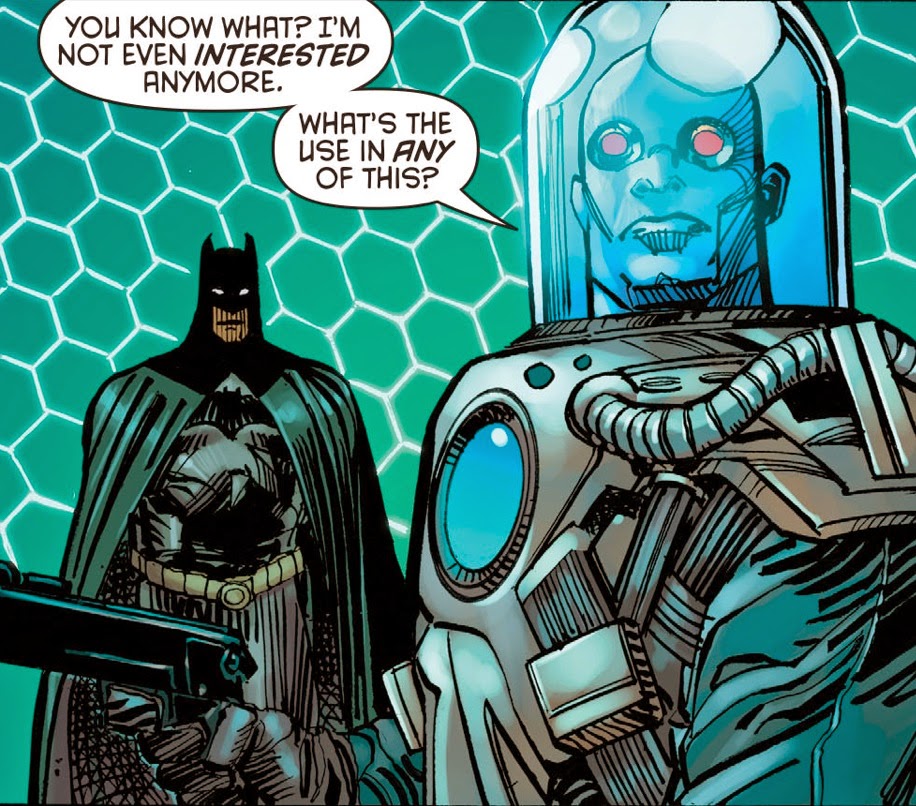 no panel, but the actual 'convergence' main mini, was awful

Convergence Superman has I got killed by Doomsday Superman as it's lead... and some quirky other earth with maudlin superman, and captain thunder aka Shazam. some Elseworlds bit players, but fun. good artwork

The convergence 'lady' JLA is nothing like the lady avengers in Secret Wars. These ladies go shopping. actually fun nostalgia for that brief James Robinson written pre flashpoint JLA that had Zatannna, Vixen and Jade! and of course Starman, Congorilla.... I liked that JLA, nice to see, but they are fighting flashpoint d-bag Aquaman. blergh. hope they make short work of that reality. 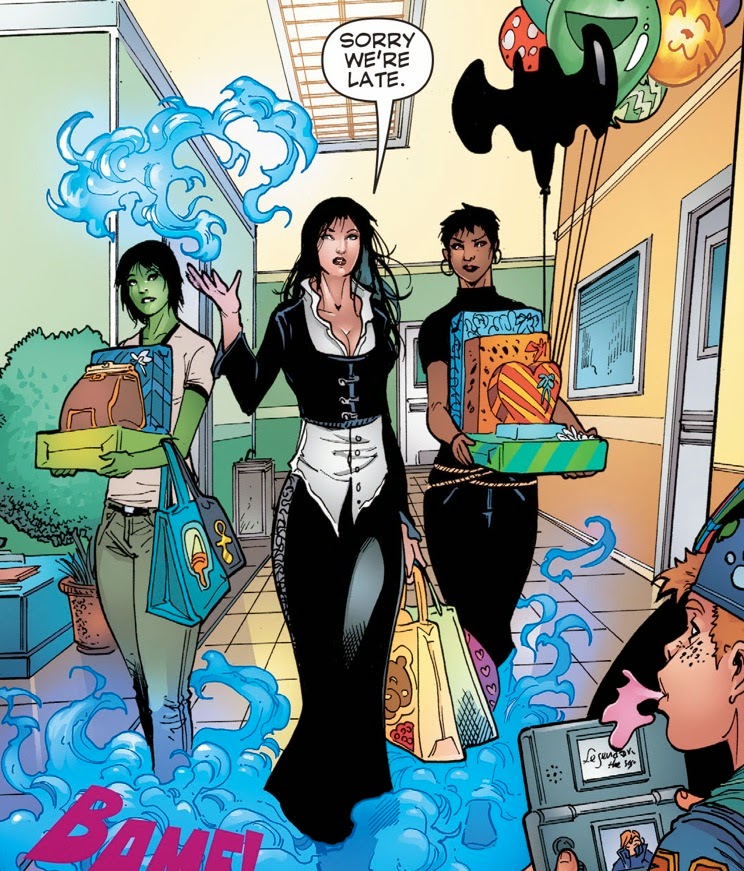 Nightwing & Oracle is the highlight of the Convergence week one. That Dick and Babs chemistry, and Babs as Oracle, which was perhaps the best Bat thing DC did throughout the 90's up to the Morrison Batman (excepting Elseworlds obviously) I teared up reading this more than once.

The Convergence Question was the second best for me, Renee Montoya, with some good GCPD stuff thrown in, as well as some other familiar Batfolk,and a groovy take on Two Face. 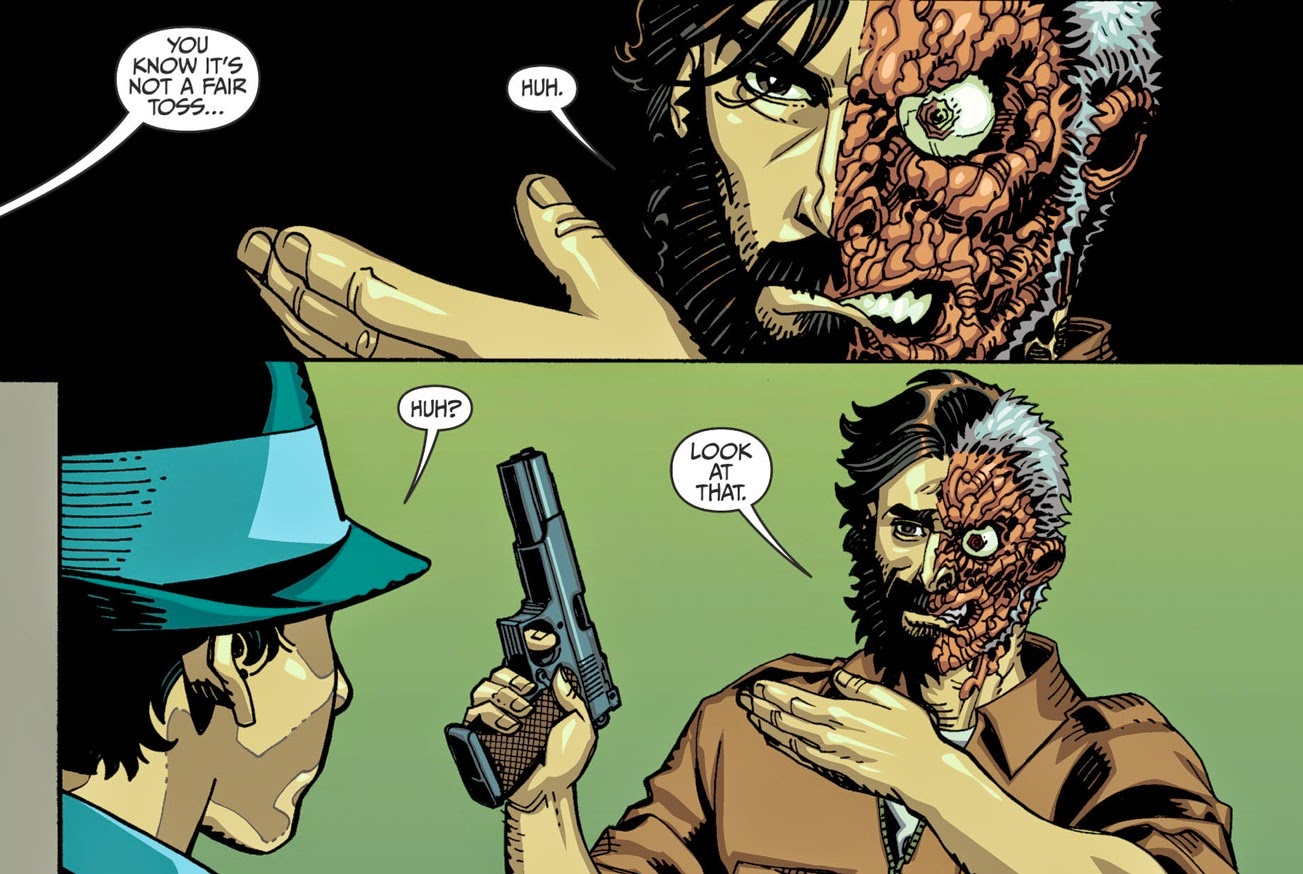 the other Convergence titles this week were okay. some moments, but kind of underwhelming. the ones that work best play the least attention to the gimmick.

All New Hawkeye - Jeff Lemire, is building nicely on some of the Clint/Barney stuff from the recently cancelled series, and the Swordsman! One of the first Avengers stories I read as a kid had the swordsman, nostalgia from marvel too! 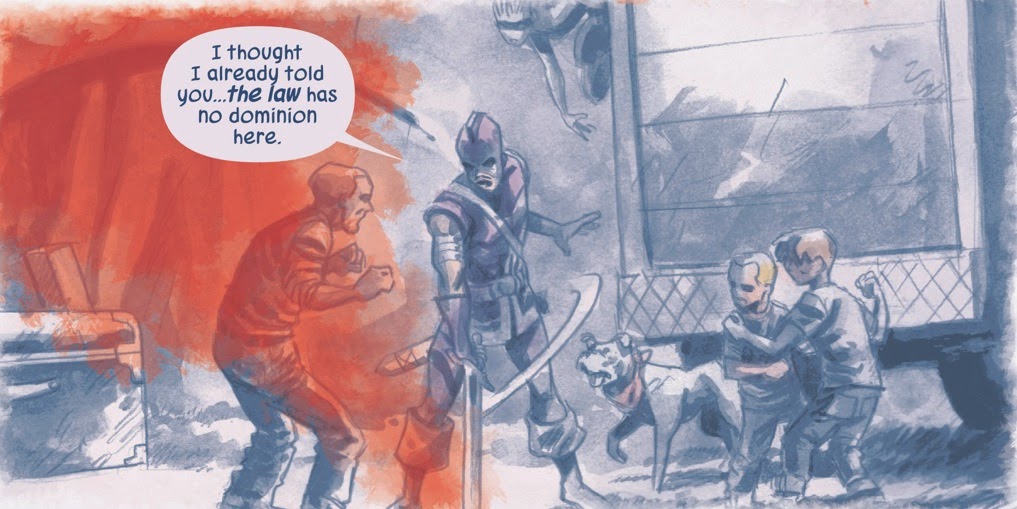 All New Spider Woman, is light breezy and in my books just snarky enough to be as fun as She hulk or Captain Marvel. nice soft reboot.

Ant-Man is growing on me every month. no wait. yes really. it is the new Superior Foes for me. darkness amid the laughs though. a step up. 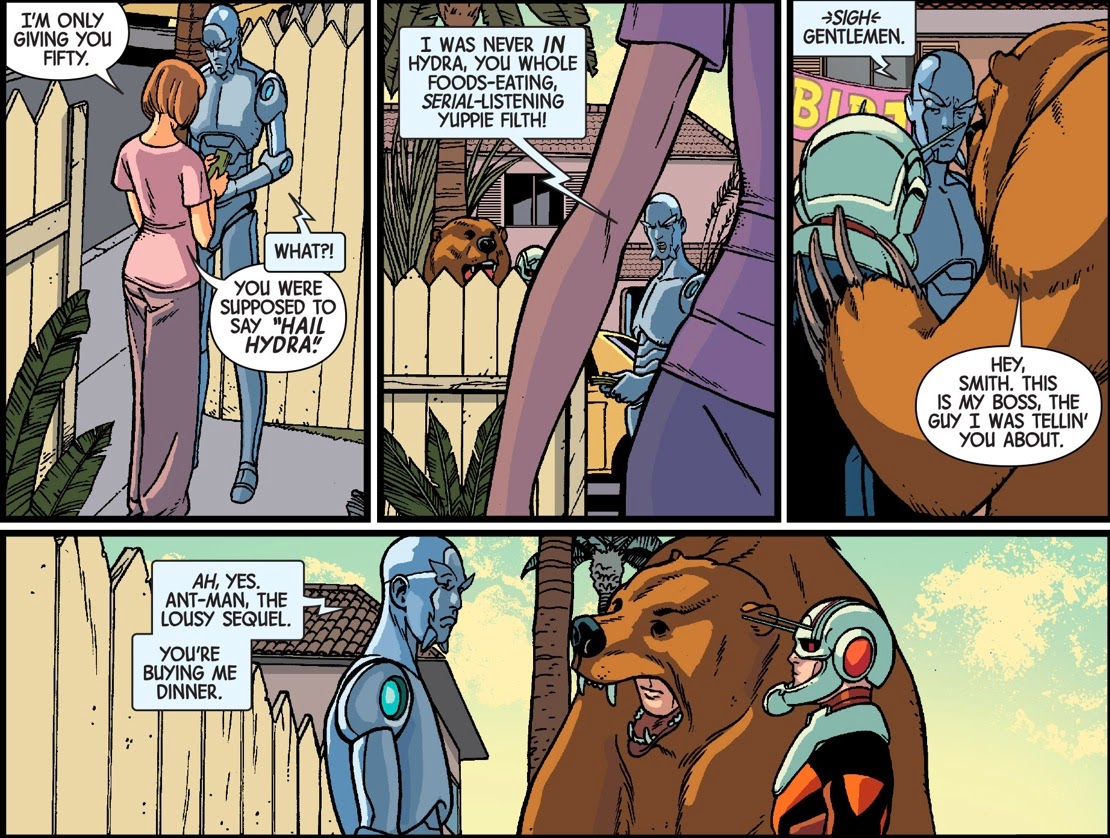 Darth Vader has his own comic, and it is really good. Don't call me Annie! 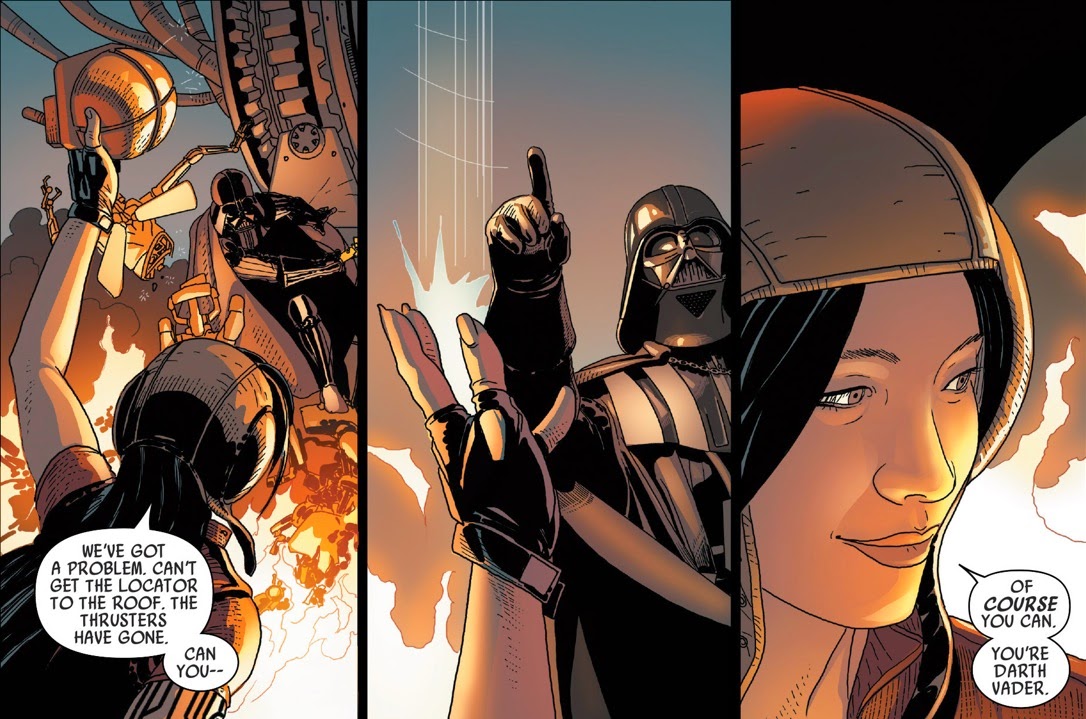 Howard the Duck also has his own comic in this crazy world we live in, or Spider Man lives in. something. The yuks and existential angst continue in an even better second issue. Sexy Prisoners! 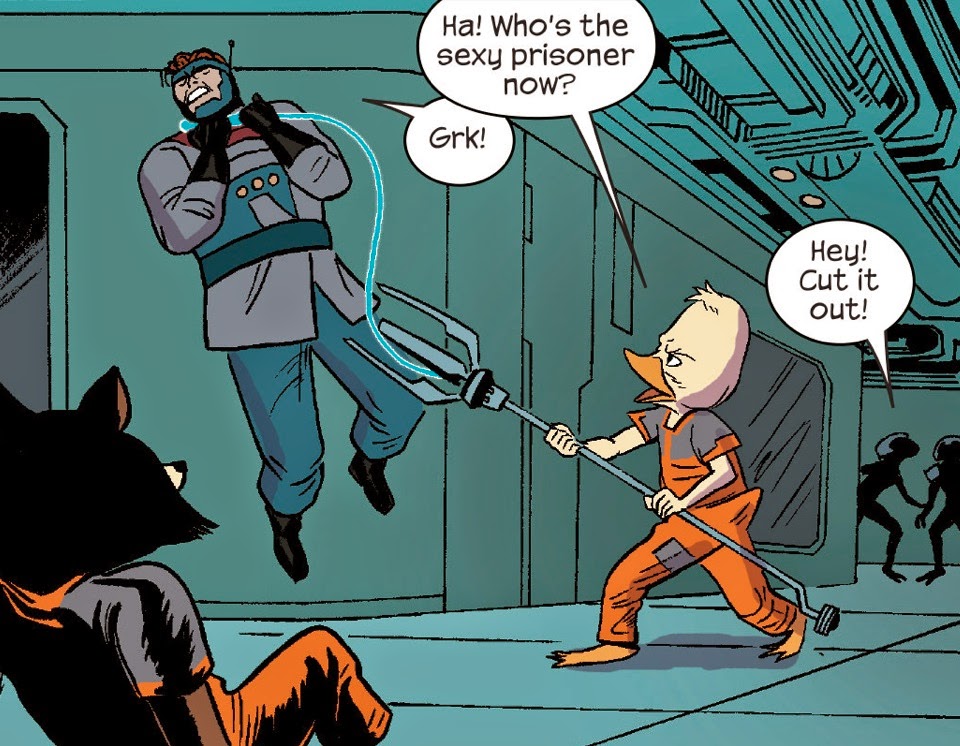 Astro City hits another one issue epic out of the the park. more nostalgia.

Copperhead is the best western in space comic you aren't reading yet, or if you are, good, then! seriously some solid western comics done with dorky aliens. 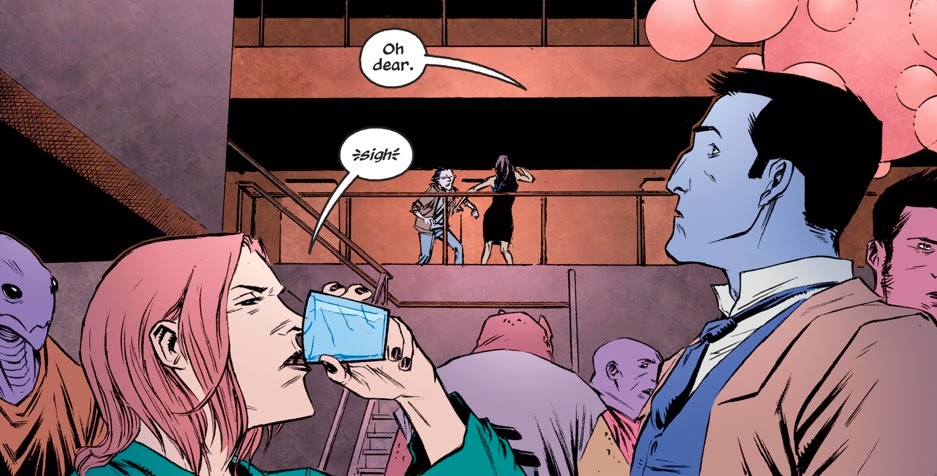 Birthright careens onward into darker weirder territory. I will be excited to read this whole story in one go, when it's done (or arc. I don't think it's ongoing?) 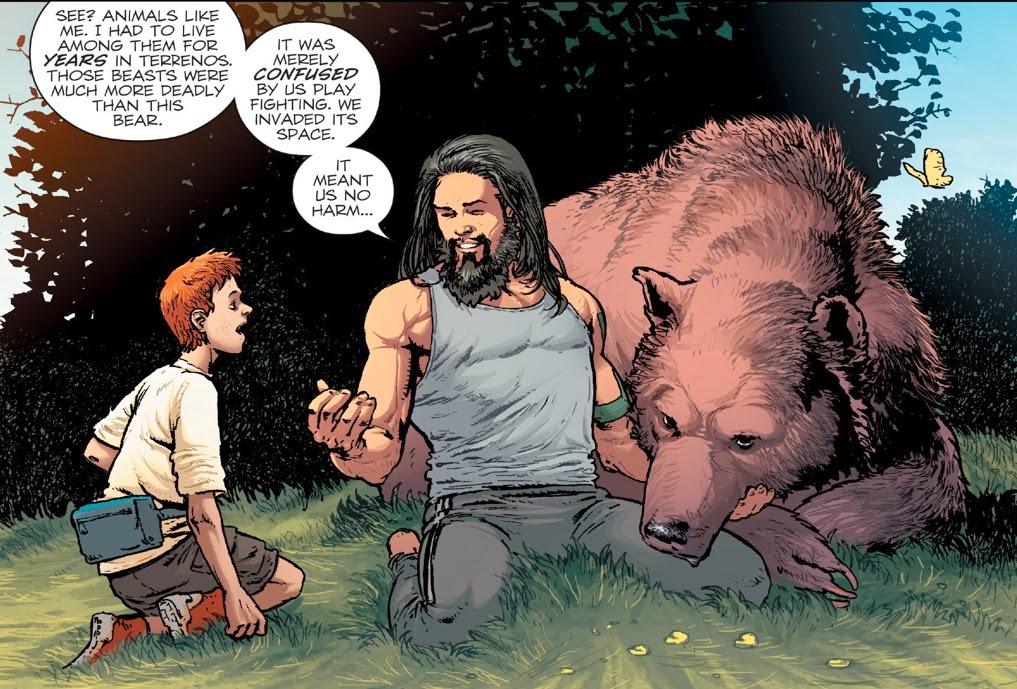 Rat Queens Rule. really they do. I just rolled a twenty to prove it. I read this 3 times before moving on. I rarely do more than than a double read, first time through. 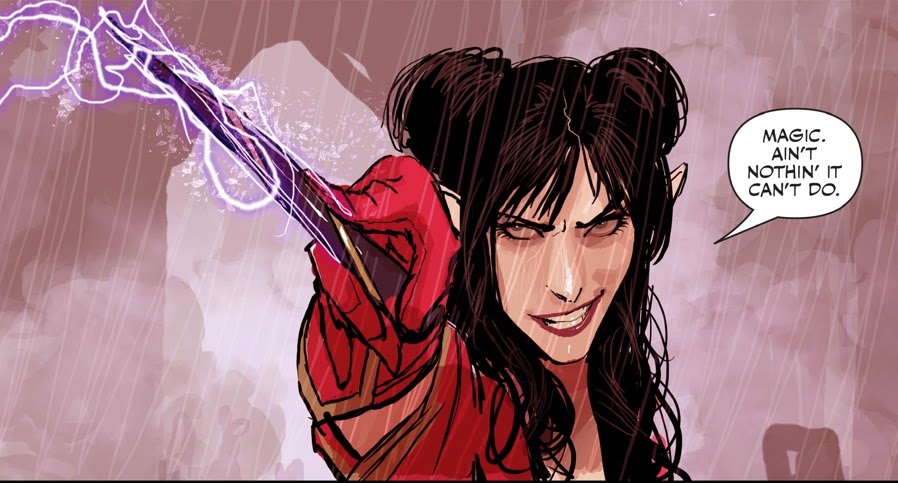 The Sundowners gets realer and realer. another great alt super hero comic that is better than 90% of marvel/dc teams ...