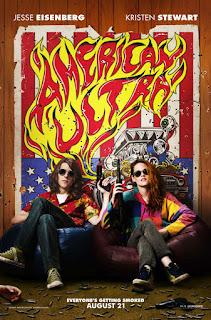 Max Landis scripted this at times funny, at times kind of creepy and weird dramedy about a stoner (Jesse Eisenberg) who turns out to be a deadly sleeper agent for the CIA. Eisenberg nails the stoner part, and the deadly assassin part with equal aplomb. This might be my favourite performance for both him and Kirsten Stewart, who I didn’t recognize right away, watching the movie. No dead eyed staring from her in this picture, like in Runaways K-Stew brings her actual acting chops to bear, and is good in a role that starts off great, realistic in it’s portrayal of the slightly more together girlfriend of the stoner cartoonist who has a pathological fear of leaving their small Virginia town. 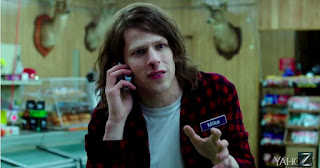 Movies are quite often kind of disappointing for me, rarely living up to trailers, or word of mouth. My expectations of this film were low based on lukewarm to pretty good reviews from friends, and based on the trailer, which made it seem kitschier than it actually is. The flick definitely has some quirks, but it’s not hokey, silly at times, but in a good way. There are some great supporting performances from Topher Grace, in easily the meatiest (some great villainous monologuing) thing I have seen him in since Traffic, as well as Tony Hale (Veep, Arrested Development and so much more) and Connie Britton, who kills it as the one decent human being working for the CIA. 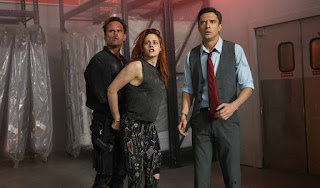 The action scenes are fairly well choreographed, and unconfusing in their jump cutting and so on. John Leguizamo, and Walton Goggins are mostly wasted as comic/pathos appeals in the film. They each could have used a scene or two of character building, and the entire film would be raised up a notch or two. That may be my only real criticism of the film. Don’t turn off the credits right away either, as the ending animation caps the whole thing up nicely. I wish more films played with the titles in this way, at either end of the movie. 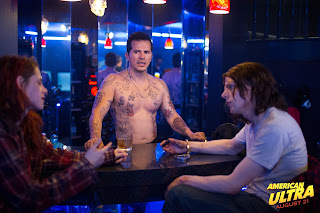 Overall, I was pleasantly surprised that American Ultra delivered much of what I hoped it would given the premise. Definitely worth renting, if only to bask in the lack of Twilighty-dead eye stares from K. Stew, and of course the weirdly good action scenes and scariness from Eisenberg. I genuinely enjoyed the movie, its maybe not the best ‘sleeper agent story’ ever; but it delves a bit into the absurdity of doing this kind of thing, and doing this kind of thing to someone. And, it has tongues firmly in cheeks much of the time.

8.1111 different grocery store items that can be disturbing lethal outta 10