Review Of Ride the Pink Horse 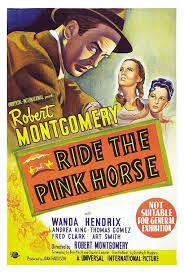 It might be a mistake to watch a movie adaptation only one day after finishing a novel that you love. Dorothy B. Hughes’ novel called Ride The Pink Horse is a wonderful small town noir of the sort associated with Jim Thompson, and at the same time a sweaty tension filled fish out of water story akin to the best of Patricia Highsmith.

The fact that the film makers let the more literary name stand instead of giving it some generic but more cinematic title is a testament to the strength of the story. Many of the details of the film are changed for those kinds of what works in a book might be too subtle for a movie kind of ways, like some of the names of characters, most obviously, the protagonist (who is no ‘hero’ in ether the book or the film) goes from the no last named ‘Sailor’ in the book to the much more noirishly named Lucky Gagin, who is never once called ‘Lucky,’ with good reason. 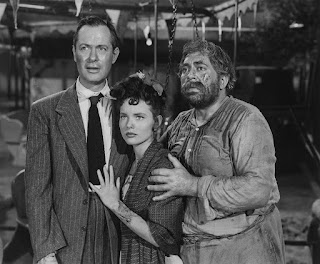 It’s no spoiler to give the very bare bones plot that is taken from the book and attached to the film story: Gagin comes to the small New Mexico town of Sao Pueblo to confront, maybe kill, but most likely blackmail a gangster who had his friend, also a black mailer killed. In the book ‘Sailor’ knows the ‘gangster,’ who is also a senator. All the great Chicago corruption angles are gone, as everyone in the film version is from DC. 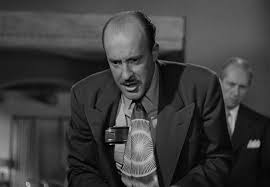 The other big character changes are the cop who is onto Gagin, following him invisibly, everywhere he goes, and the gangster, who also have different names and motivations. What makes these changes work and sing really are twofold, wonderful dialogue from writers Ben Hecht and Charles Lederer, legends on their own, and a great cast of scenery chewers like the ubiquitous Fred Clark, who plays ‘Frank Hugo’ the big bad gangster. Clark gives a great turn as a slicker than slick talker, who is constantly almost talking Gagin into thinking he won’t just have him killed when he gets the blackmail dealt with.

Also wonderful are the very familiar Art Smith who you might recall from another great Hughes adaptation “In A Lonely Place,” where he played the agent, Mel Lippman. His performance drips with butter as the savvy old cop who is about three steps ahead of everyone. 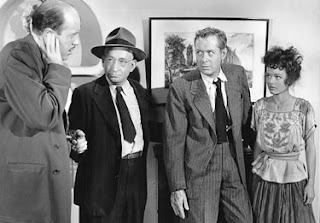 The other great character actors in the film are the lesser known Thomas Gomez (who reprised the role of “Pancho” in Montgomery’s tv episode remake of the film in 1960 on his dramatic Tv show- Robert Montgomery Presents); and  a nice turn from Wanda Hendrix, as Pila, the young girl follows Gagin around, helping him, and not quite being the love interest, because she is so young, the character is 14. this is an aspect I like from the book, that they didn’t change too much, there is an inferred sexual tension, but nothing really. Gagin/Sailor is more like an uncle, or father figure in both the book and the movie. Pila doesn’t pick up men like her friends, she helps them stay alive as they blackmail gangsters. 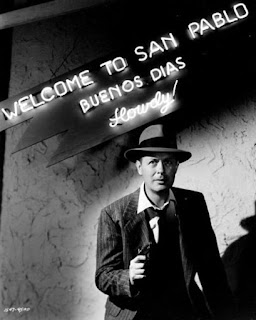 The film is solidly directed and has great pacing and dialogue, well worth a watch, but don’t watch it too close to reading the book, some few small bits will nag at you, like the protagonists initial racism and the Spanish speaking and native population, that he grows to regret, as by the end, these are his people. The sweaty paranoia of Sailor cannot be matched by quirky Robert Montgomery’s Gagin who is far more moral, and upright. In my imagination, Sailor is more of a pre-war Elisha Cook Jr, hustling, sweating, unshaven, than an almost suave, shaved and tidy war hero - Montgomery.

Quibbles though. Ride The Pink Horse is a great adaptation, that doesn’t need to stick to the literary details to serve up a fun crime story with a heart of gold.

The Criterion edition looks gorgeous as usual, and is worth renting, or buying if you are thus moneyed. Lovely to look at the black and white is saturated, and the greys stand out. beautiful job on making what could be a grainy washed out old movie look new and spanky!