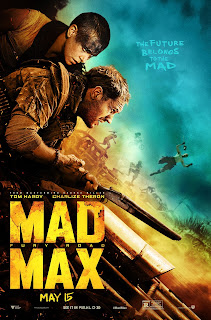 Maybe it was all the hype, maybe not, but I probably didn’t think this film was as good as I had been told. Don’t get me wrong, it was very entertaining, and I will rate it fairly high on my dorky ‘outta 10’ scale, but simply for sheer entertainment value. Obviously the film passes the ‘Bechdel test’. But it is by no means some sort of Feminist masterpiece, nor is it some kind of misandry masterpiece as the mra nutters would have you believe.

What I watched was an exciting, silly, high budget chase movie with lots of car crashes, ‘Road Warrior-esque’ bad guys, and suitably post-apocalyptic backdrop. The look was pretty consistent with the second two Mad Max Movies; Road Warrior (I do not acknowledge the whole mad max 2 nonsense anymore than I do, ‘a new hope nonsense’ [/grumpyoldperson]) and Beyond Thunderdome, which yes, counts. It’s quirky and fun, and also has a couple of badass female characters.

As far as Furiosa goes, she’s top notch, the rest of the women characters though are mostly one note, supermodel-y, and almost all the old ladies (not to spoil it) are just cannon fodder, aside from one or two nice crone/maiden scenes, which to be fair are nice to see. 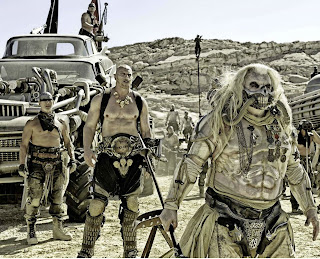 I also don’t get the whole Max is just a sidekick angle of criticism, I have heard: he’s in as much of the picture as he should be. Max has never been much of a talker in his earlier incarnations, why should he be so here? I thought Hardy gave Max as much gravitas as Theron did Furiosa: two great pretty equal people in terms of kick-ass heroes. I think though the movie’s super simple plot lacked the gravitas of the actors. I dug the Warboy subplot, and for me as cheesy as it was, as I think about the movie, that is the my favourite part of the plot, and it has the most tender bug eating scene in cinema history perhaps? I also didn’t care much for ‘Immorten Joe’, maybe that’s it. One note, if well set dressed villain. One note. 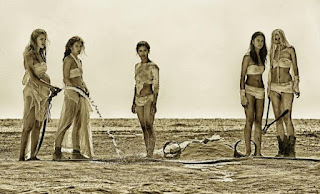 I may have to watch it again to come to a final judgement, but the film just lacked something for me to put it in the same league as either Road Warrior, or Mad Max, or even Beyond Thunderdome if I am honest. I have so much nostalgia for those movies, maybe nothing can live up to them. Seems reasonable to me.  Nostalgia is a high wall to climb.

I definitely recommend this as an exciting see it in the theatre post apocalyptic adventure, but if you are looking for a feminist masterpiece, wait for whatever Lucia Martel is doing next.