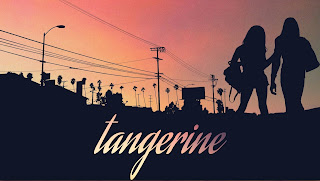 Tangerine is one of those films that ‘feels like’ it was shot chronologically. The first few scenes are a bit rough, the acting is a bit iffy, but as the characters of Sin-Dee and Alexandra walk endlessly through their drama filled Christmas Eve Day in L.A. The picture gets more gripping, the cinematography, the acting and the script all get better, more polished in a low budget way. The locations give a nice grimy seventies feel to the whole thing. Sin-Dee (Kitana Kiki Rodriguez) is especially unlikeable at the beginning of the film, her single mindedness in finding her pimp/boyfriend and the girl he ‘cheated on her’ with while she was doing a month in jail, is not terribly nuanced. The buffer of the her best friend Alexandra (Mya Taylor) trying to keep her from all the drama she is creating, while trying to hustle tickets for a show she is doing that night keeps the whole thing from being one note.

The cinematography, aside from the initial few minutes is outstanding, especially when you realize it was shot on an iPhone. It makes you realize that a well composed frame brings more to a shot than an expensive lens. 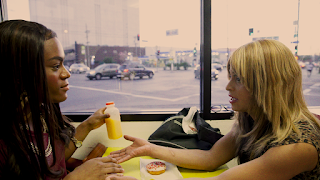 As a transgender woman, myself, (as much as I know it is the reality of a lot of trans women, especially Trans women of colour,) I would love to see a film about Trans women who aren’t sex workers, or tragic doomed to die failures. Is there such a film? At least the trope of Trans women being sex workers is muted somewhat in the film by there being very little sex, or sex working depicted, very much by the end, in a lovely shot, the film really is all about two friends and their friendship, that they strain and push at with each other, but in the end, no matter what they are there for each other. The sex work depicted has a grimy and sometimes humorous reality to it, that you won’t find in a Hollywood take on the same topic, despite this film being filmed on location in West Hollywood.

The Trans loving taxi driver Razmik adds a male gaze that should kind of creep you out, and does, yet he is a fairly sympathetic character in many ways. The editing makes the script sing more than the words do. Shots of people walking or driving, riding the bus have a sense of urgency that is easier to miss than to hit. Aside form the performances by actual Trans women, playing Trans women; the best thing about the picture is this sense of movement, urgency that reflects the urgency, the insecurities of these characters, all of whom pretend to be brassier and tougher than they really are. In the end I felt pangs of empathy and sympathy for pretty much everyone, Trans and Cis. A glimpse at people living with who they are, who they want to be, and the drama that that schism creates through their own inability to see who their friends really are, who really loves them, until push literally comes to shove. 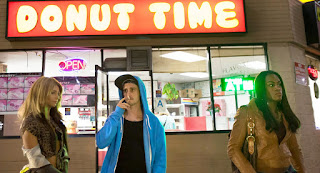 I really hope to see these Trans women playing other roles in the near future, they prove themselves capable of playing women with dreams, goals, and who face the struggles everyone, not just prostitutes, not just Trans women, have to deal with in order to even attempt to get where you want to go. A solid low budget drama, that sometimes evokes John Waters or Alan Rudolph, but without being quite so self consciously outrageous. I think that’s what makes this film relatable, even the characters like Sin-Dee who at first seem kind of ridiculous end up having actual humanity and nuanced friendships and self awareness.

8.5647 times you dragged that blonde woman by the hair who was sleeping with your boyfriend across town to confront him in a donut shoppe outta 10