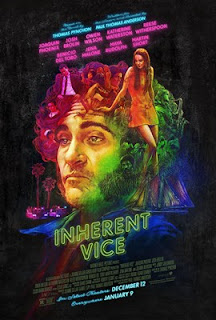 Finally got around to seeing the latest PTA flick, which I had heard a lot of conflicting opinions on. Inherent Vice is also based on a Thomas Pynchon novel, so there are of course some heavy wight ideas going on. Personally the only Pynchon I have ever been able to finish reading is The Crying Of Lot 49.  I had my own sort of mix of skepticism and hope going into this. Tried and tried to get through V. and Gravity’s Rainbow three or four times each, but also, something makes me give up on these books, I usually am so into the books, the first half or so, then something that just happens is that I have put the books down, and moved on to something else. Maybe it’s just timing; and I say this because this is what I see in this film, something that PTA groks about pace and timing, that generally, (with the exception of “The Master, which I can’t seem to stay awake through.) I find Pynchon doesn’t, he always loses the rhythm for me somehow. 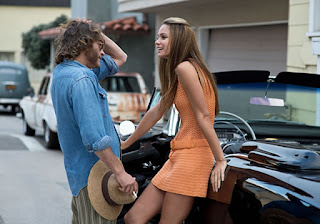 This is I think PTA’s best written script, for that reason, he hits all the right noir notes: the bedraggled, PI, the ex who drags said PI into a web of her troubles, plucky sidekicks, iconoclastic bigger than life ‘villains’ and a well developed co-dependant relationship with a cop. Seriously, this movie is like a class in how to create a faithfully 1930’s, 40’s esque noir. The cast is a nice blend of very familiar faces and new or vaguely familiar faces. 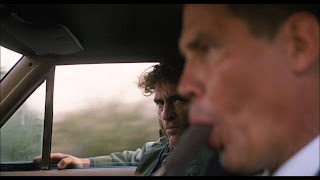 Joaquin Phoenix is a stoner Bogart/Sam Spade, or Phillip Marlowe, whose relationships with women echo those with a hint of maybe Elliot Gould’s laconic LA Marlowe. the ex shows up, spins a web of intrigue and disappears faster than you can say, “Otto Premminger’s Laura.” Josh Brolin’s broken down flat topped cop deserves an ovation. The chemistry between him and Phoenix is a joy to behold. Some great cameos from Martin Short as a drugged out purple velvet suit wearing sex fiend dentist, Maya Rudolph as Phoenix’s witty bob coifed gum snapping receptionist bring a real sense of the usual PTA ensemble. His use of Joanna Newsome’s character Sortilege as a greek chorus style narrator is the final coat of noir sheen. Well done narration is a marvel in this day and age. 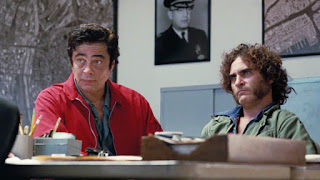 This is something that the more I think about it, makes me think that PTA is a good fit to try to realize a Pynchon novel. They both fill their backgrounds as much as they do scene, and plot, and that the characters really are the scene and the plot. His adaptation of the novel captures these aspects that I recognize from the first halves of Pynchon that I have read, that new characters are constant coming at the protagonist(s), and these people are what create the huge web of conspiracy and propel the story far more than the action does.

The actions the characters take are always in reaction to another character, more than their own ideas, or morality. Everyone is struggling. There is no real denouement, things just sort of settle down, as certain characters are eliminated, or cowed by someone else, and in the end our ‘heroic hippie,’ manages offer one person salvation. It’s a modern noir, you can tell as the femme fatale suffers no real repercussions for the fires she started, and wandered off from. In a 30’s film, she would have been headed for jail or death. 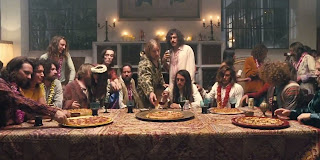 I like this picture even more than I did when I was watching it, now writing and thinking about it, I’d like to watch it again. Outstanding performances, and a titanium strength script propel this PTA up the ladder into my top five PTA films after just one viewing. It makes me want to go back and finish those Pynchon books, and read the one this is based on. I am giving this a higher rating than I set out when I started writing this review. See this film and talk about it. Even if you hate it, I bet it will have you talking about it.

8.8888 times that your ex drops by and casually ensnares into a criminal conspiracy that turns out to be both real and not real outta 10