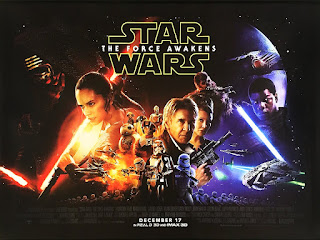 I might be the only person I know who didn’t see this in the theatre, at least of those I know interested in it. Not everyone is a Star wars fan. Anyway, for vague lazy reasons, I never bothered seeing this in the theatre. And I probably still could, despite it being on disc/streaming already, it’s still playing in theatres here and there I think.

While I enjoyed it quite a bit, I found my expectation that most of my enjoyment would come mostly from nostalgia, (something you can’t underestimate in terms of cinematic pleasure;) to not quite be the case. A film that reminds (in a good way) of other films that energized and inspired you goes a long way to a positive review. I was more interested in the new characters, and the fact they fit the vibe of Star Wars whilst being actors of a far greater calibre actors than the old fogeys in this episode who in my opinion, really phoned it in. 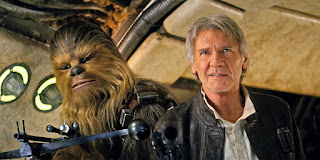 The characters new and old, fit really well in the mould of traditional Star Wars universe characters, phoning it in or not. It does have an authentic Star Wars feel that the prequels had moments of, but never capitalized much on for me, except for the third one. This film hits most of the notes, and the action scenes are fairly well choreographed.

Rey and Ren’s final showdown, I liked quite a bit, though the stage fighting was a bit rushed. The characters and the way they make decisions, by just bullshitting their way through everything is the most realistic thing about Star Wars in general, in my opinion. No one really ever has much of a ‘plan’ despite most saying so over and over, “I have a plan.” 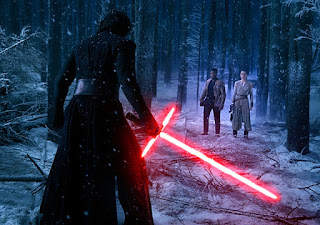 The vibe of this movie is more that of ‘the expanded universe’ of the comic books and the novels, more so than the so called  ‘Star Wars Canon,’ that it actually is, which is fine with me. I have always been a bigger fan of Star Wars comics, games and novels, than the movies. The thing it lacks though, is gravitas. We get a glimpse of real danger perhaps from the new ‘Emperor figure of Snoke, and a touch of it in the coda with beardo creepy robot handed Luke, whose appearance is too much of a token cliffhanger, even, for this particular serial.

I think you can only have so many planet killing weapons that are easily destroyed before such a huge plot device loses it’s lustre. The overly familiar plot, the terrible acting of all the elder characters is kind of painful. I love Carrie Fisher to bits, but she has never been so wooden. Ford was only happy it seemed in his (spoiler) death scene. 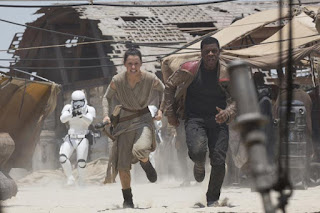 The new younger characters though had lots of moxy and I hope that the future films have less cameos from the old gang and more of Finn, Rey, and Ren, who nails the whiny aspect of being a Sith. Like all conservatives, or fascists, he’s really not much more than a whiny child with far too much power, and no real idea of how to utilize it, other than wrecking shit, and making people feel bad, or embarrassed. ) One of the best moments in the film is whilst Kylo Ren wrecks an expensive torture chamber off screen, with the old light sabre, and two troopers go to see what the commotion is; when they realize it’s just Ren wrecking shit (again) in an infantile rage, they just quietly go back the way they came.

Criticisms aside, I found it to be mostly a fun ‘carnival ride’ kind of film, and I think I would have enjoyed it more in the theatre, with all the dogfights and what not, which were kind of exciting, if a bit dully choreographed. 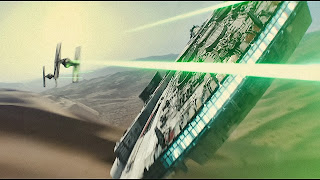 I am hoping Rogue One has a bit more pilot/plot driven action. The new generation of young Star Wars actors are every one better actors than most of the old guard, whose characters should be put to rest in my opinion. Daisy Ridley is this trilogy’s Ewan McGregor, in terms of action, impetus and well, being a decent actor. The most innovative thing in the film is having a faceless Storm trooper be the soul of the film. The moment Finn unmasks changes the entire series, and to me in the best possible way. Boyega’s infectious in his performance of someone who realizes he can be a free being. 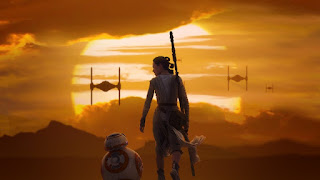 Let the new kids have the sandbox, and please Episode VIII, we could use a film without a giant planet or planets destroying weapon. There has got to be something else really evil that this Sith 2.0 ‘First Order’ can come up with.

Star Wars is always at its best with Light Sabre, and or X-Wing/Tie Fighter dogfights, punctuated by cheesy adventure yarn dialogue. There is quite a bit of that in The Force Awakens, but even more would be appreciated by this 50 year old kid.