The Man From U.N.C.L.E.
- Directed by Guy Ritchie. 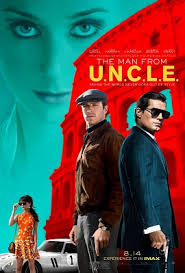 A pretty entertaining movie rehash of one of my very first ‘Favourite TV shows.” Like my other early rerun Favourite ‘Star Trek,’ ‘The Man From U.N.C.L.E.’ was in reruns for the first time, after 5 years off the air, so 1973-ish for me.  My first crushes on men, were probably on these two, ‘not as suave as either thinks,’ and awesomely named super spies, ‘Napoleon Solo, and Ilya Kuryakin. I have rose coloured memories of watching that particular spy show. I was very much as a kid into spy tv shows, like this or, ‘the Avengers,’ ‘I Spy,’ ‘Get Smart,’ and the zillion others that came and went in the 70’s. 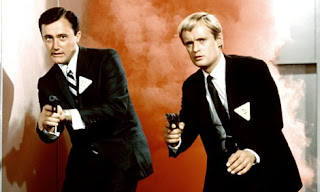 I tried my best not to bring too much nostalgia to this movie remake. I enjoy the Star Trek movies, best as really good two part episodes of which ever show the characters are from. Most old tv shows rebooted into movies suffer from trying too hard to re-invent the wheel. and I am always a bit trepidatious, and try to look at reboots, as just that, an interpretation of that old movie, tv show that you liked. 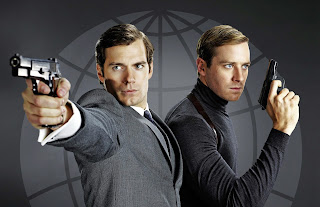 The Man From U.N.C.L.E. suffers a bit from comparison, and nostalgia though, despite the great look, set dec, and overall great retro look. It is actually in the movie’s favour that unlike Bond, they aren’t trying to keep contemporary. The only way The Man From U.N.C.L.E. really works is during the cold war. Otherwise like Bond, it may have the name, but it’s not really what it was meant to be. I Really enjoyed this film. It was very well paced, and I thought the cast was totally on board with keeping it retro, and kind of ‘Mad Men’ slick. Superman was great as Solo, totally inhabiting that suave but dangerous mid-Atlantic accent, and always on the game manners. The Lone Ranger had a bit of a tougher role, in that he was much less outwardly nerdy than McCallum’s original. The PTSD is played pretty respectfully, but brings down what should have been just slightly more light hearted a film. 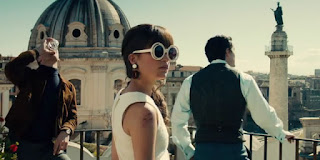 Obviously, the film is setting up a possible sequel and beyond, by the ending which flows very nicely. The thing is, as entertained as I was by this pretty slick picture, I kept thinking, man this would make an awesome TV series.