The Avengers: Age Of Ultron
Directed by Joss Whedon 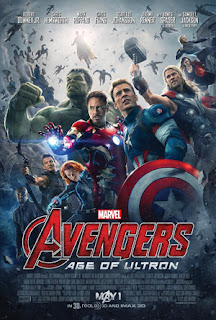 Well, it definitely was not as bad as a lot of folks made it out to be this little film. I am a big reader of comic books, and superhero fan, but even I think there are too many superhero movies. While this movie doesn’t quite capture the fun of the first Avengers movie, it scores a lot of points for me, simply by not being called Avengers 2. Oh, there are tons of spoilers in this review, fyi.

The initial scene where everything is cgi seemingly except a few cutaways is weirdly out of place in terms of the cinematography, but it is a comic book movie, so I say embrace the cgi. It is supposed to be a bit ‘cartoony’. The lack of actual Loki (Tom Hiddleston) makes the whole thing less fun. The second most jarring thing for me was James Spader’s laconic glib take on Ultron. This really threw me for about half the movie, Ultron sounds like a preppy overprivileged lawyer?

Ultron’s biggest weakness has always been his daddy issues, and without Hank Pym to kick around, this is a bit tougher to digest for an old nerd like me. But The MCU is an alternate to the comics, so room for change is okay, and by the end of the picture, I was liking having Alan from Boston Legal as an evil robot. And Tony Stark really is a more realistic  bad Dad, what with being such a dink most of the time. But it took a lot of work to get me on board with Alan Ultron. 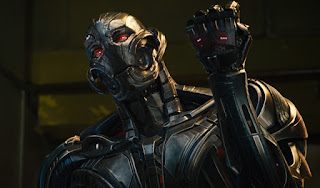 The most jarring thing to me though was changing Hawkeye into a family man with a wife and kids. This really is not any Hawkeye you have seen in the comics, he’s more upright and forthright. Comic book Clint Barton has always been a defensive quipster with a big chip on his shoulder. Cinematic Hawkeye is the heart and soul guy when Cap is not around to be that. the most interesting part for me was the Hulk/Black Widow pairing, that while being played out in a cliched way, is interesting as those characters don’t have much history in the comics, and is an odd pairing, that kind of works chemistry wise with the two actors. The idea though that Natasha can’t escape a simple jail cell and needs Bruce Banner to come by and do it for her though is as ludicrous as the several deus ex machinas that happen with Thor, and the Vision, who has just the right kind of upstanding, but creepy vibe. 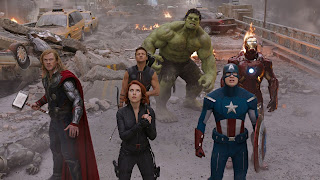 The action flowed pretty nicely I thought, and while some of the plot holes made my brain hurt, it was a reasonably fun summer movie. The dialogue sometimes had the vibe of too many cooks in the kitchen. If it’s too hammy for a comic book movie, its pretty hammy: aka everything that Samuel L. Jackson, as Nick Fury, says. The origins, and backstories of these movie versions of familiar long time characters are far less convoluted, by decades of revisions and reboots than in the comics, and I hope this stays a thing. Please don’t retcon anything mid movie series, Marvel.

The film holds together much better visually than it does plot wise. I was also pleased with the versions of Scarlet Witch, and Quicksilver. In the Comics their stories are ludicrous, and only Pietro has a clear timeline of being a bad guy/good guy. Wanda is the Avengers punching bag for horrible retcons. I don’t think Pietro is dead. Fast metabolism! At least I hope not, I liked this take on him, which personality wise was pretty bang on.

7.23 pretty funny cameos from the very few black characters in the film out of ten