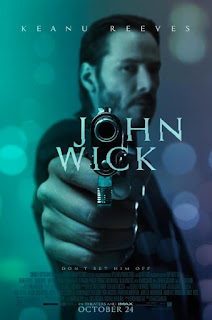 There two kinds of Keanu Reeves that the people want. Sad Keanu, and Mad Keanu, ‘John Wick’ gives you both and lots of both. The set-up involves already sad former assassin John Wick being made even sadder by GOT’s Alfie Allen, aka Theon/Reek. I can’t look at the actor with wincing. He nails the snivelling entitled gangster’s son who does stupid thing after stupid thing (not to spoil it) to turn Sad Keanu’s sad frown in to Mad Keanu’s angry grimace.

I had heard how great this movie is, and well, I definitely enjoyed it, it really is pretty hackneyed and silly. Lots of great cameos, and a hotel that is exclusively for assassins.

The gunfights and streetfight/MMA throwdowns are well choreographed, and happen with a regularity that keeps you from caring about nuance or character development. It’s okay, though, the movie really plays out like that really great level you had that time playing Max Payne. Feel good movie about sociopaths? Kind of. Very entertaining, and re-watchable, I imagine, a you won’t retain much other than good vibes at seeing Broyles (Lance Reddick) from Fringe as the Concierge at the assassin hotel, and so on. 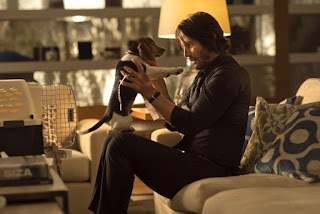 Some nice second Unit NY stuff, and a fun but under utilized Willem Dafoe  round out a fun fast moving popcorn shoot em up flick, in John Wick. If you are looking to shut down your brain and watch Sad Keanu morph into Mad Keanu and kill his way through the Russian Mob, this movie is for you. Fun, dumb etc et al...

What We Do In Shadows.
Directed by Jermaine Clement, Taika Waititi 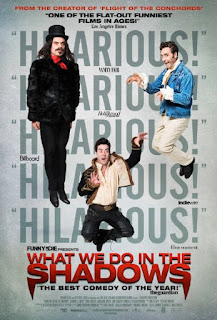 I was initially wary of this flick, as it looked to be one of those ‘Office’ mockumentaries that I have gotten so tired of. Turns out though that this particular comedy has far more in common with the Trailer Park Boys ‘moc-comedy’ that your Office, Parks & Rec etc. Thank Dracula!

Who, in this movie is hilariously portrayed by Clement as ‘Vladislav’. The premise is that there is a doc crew (who are silent until a FUBAR like moment near the end) is tracing the lives of 4 Vampire Flatmates in Wellington NZ. Each vamp is more than a bit odd; and endearingly so, as their long livedness makes their ideas, and ways of communicating, almost adorably awkward, unless they are draining you of blood. One Vamp, who turned at least one of his flatmates is an 8000 year old Nosferatu, who crypts it up in the basement. 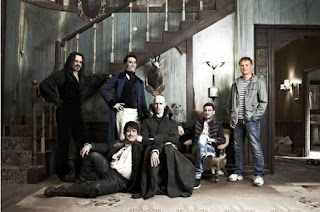 This is the most fun watching vampires that I have had in ages. Adorable, quirky inhuman monsters can be quite relatable when it turns out they are just nerds who live forever. It is actually kind of a fresh take on vampires, and the undead. Not to spoil it, but the werewolves all have dad bods, also they have a swear jar.

The movie actually kind of rolled itself out kind of episodically, and by the end, i was imagining how much fun it would make as a series, say 6-8 episodes a year. Don’t milk the premise to much with a long season, it could be fun. I mean Trailer Park Boys as Vampires, C’mon! Great premise, well executed, pun intended. It’s nice to see that there are some decent comedies out there, even if you have to get them from New Zealand.

8.5 Vampires who knit ugly sweaters for their familiars outta 10