Everything Is Coming up Zardoz

Everything Is Coming up Zardoz 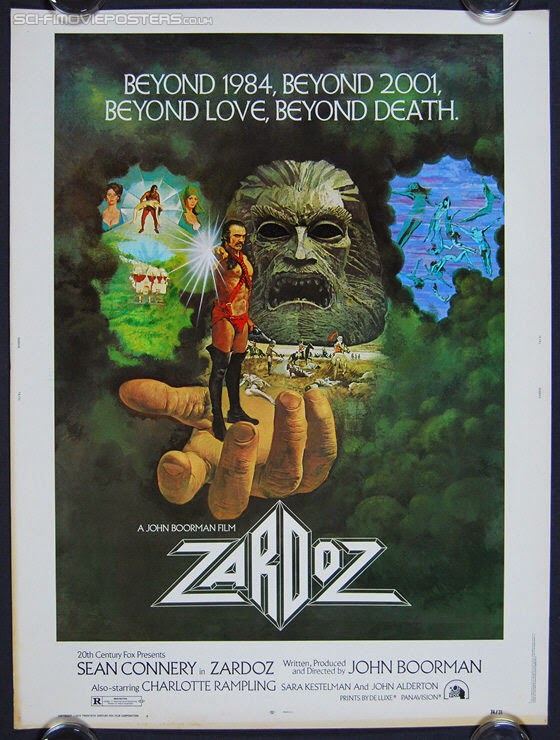 Everything Is Coming Up Zardoz is what I am calling my latest ‘blog film fest.’ I did this a few times last year, and want to try and do these more often if only to get me watching movies more again, and writing, thinking about them. Since leaving the video store, I feel a bit like my interest in movies has waned to the point I hardly watch them anymore, let alone develop interesting conversations about them.

So this ‘fest’ is like my previous ‘Swashbuckling festival,' and a Noir one I did, a bit of a narrow genre focus. I have about 10 or 12 films to get through and will do my reviews the day after watching, or maybe the same day, if I get to it early enough. This fest is all about obscure or maybe not so obscure 70’s Sci Fi. I am Starting with Zardoz because I have only seen it a couple of times, and haven’t given it much critical thinking beyond the obviously trippy elements, and the unintentionally (that I now think are not all that unintentional.) funny moments. It is also I think the film that has recently garnered even more of a cult status than it has had since it was roundly panned and mostly avoided in theatres in 1974.

A friend of mine with his own review site with a much bigger following than my own -Klymkiw's film Corner- was the one who suggested that I narrow my focus from ‘scifi’ to 70’s Sci-Fi. Greg also shared with me a snippet from an interview he recently did with Director John Boorman, where Boorman muses on the fact that he recently got the call from studios to sign off on, and do a bit of work on a new home video edition of the flick. I am hoping that includes Blu Ray. The dvd version I borrowed from one of the last remaining video stores in the galaxy is so old that it is ‘letterboxed’ which really is kind of annoying when you have a newish TV that has the same dimensions as the ‘letterboxing,’ but that is what is available. that said, the transfer is actually pretty stunning, and the sound well mastered. I can’t imagine what this must have looked like in glorious 35mm when it came out, or how it will be much improved with the coming new release.

Anyhoo, here is the actual review....

Zardoz was one of those VHS movies for me, back in the day, that I just never got around to. It somehow looked so cheesy. Even after starting Film School in the mid eighties and realizing that the film maker John Boorman was a pretty darned interesting director, who had made not only the classic, Deliverance, as well as my favourite existential colour noir: Point Blank. Eventually, sometime in the early 90’s someone threw on a vhs as we are all sitting around getting wasted. I recall thinking how trippy it was, and how the effeminate neutered ‘future’ men of ‘the vortex’ made me uncomfortable, also that Wow, Charlotte Rampling can really summon her inner bitch. The setting of the party watching was not really conducive to real critical thinking, though if I recall correctly, a few interesting conversations were had, in regard to the ‘hollywood hippies’ of this future world.

Plot wise the movie is fairly simple, though there are some nice twists that one can appreciate a bit better watching it, mostly sober as I did last night. Sean Connery bestrides this movie in various versions of his famous red diaper, as ‘Zed,’ one of the Giant Floating Stone Head of a god’s “Exterminators.” Who are gang of two headed mask wearing, bandoliered and diapered, rifle and pistol shooting folks in ill fitting suits from horseback. It’s all a bit confusing at first. why are these Janus Mask wearing yahoos shooting pretty much everyone but themselves that they see? Turns out later to be ‘population control’.

There are a great many ‘rainbow connections’ to be found in Zardoz. Zed stows away on the big flying head and encounters the wizard behind the controls, who (and not much of spoiler here, if you watch the opening, that I always forget until I see it) he promptly shoots. He makes it to ‘the vortex, which is a telekinetically, or telepathically shielded town of ‘future humans.’ Who are a bunch of supposedly emotionless folks who never die, as they clone themselves when it happens, and live forever. Of course they are anything but emotionless, mostly they are petty, and mean, occasionally nice. They run batteries of tests on old Zed, tapping his memories of killing and raping, as an Exterminator, he was allowed to breed. He has to live in a cage like Charlton Heston, and is made to do all sorts of menial labour.

Of course eventually it turns out that Zed is superior to these immortals who have dubbed themselves ‘Eternals’ and Zed’s kind as ‘Brutals’, mostly because they still have a sex drive, and need to propagate. Zed manages achieve his 'mission' to destroy the Vortex, with the help of the most cynical of the Eternals, and the guns of his Brutal cohorts, who were just waiting for his signal. The whole thing plays out like some really really psychedelic episode of Dr. Who. The best line in this film filled with quotable bits, comes from Zardoz (aka Arthur, the Eternal) himself :

“Guns are good. The Penis is Evil.” 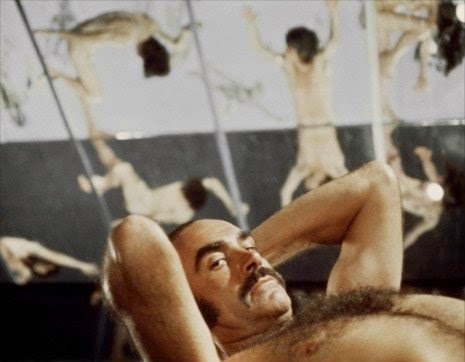 Seriously, this line gets tossed at you in the first 5 minutes. But really it is the Mcguffin of the picture. I had totally forgotten that there are a couple of ‘endings’ in this film: The final Battle where the ‘Brutals’ shoot down the Eternals with the cold bloody efficiency of a gang of banditos in a spaghetti western, and the time lapse ‘happy ending,’ where Rampling (Consuella), and Connery (Zed) live out their lives in a cave ‘en tableau,’ whilst wearing the these green felt coats that I desperately want to own right now. The last fifteen minutes have an almost Bunuel level of surreal carnivality with that broken fourth wall kind of vibe that I love.

Oh and of course I want to mention some of the other actors, other than Connery. Charlotte Rampling as Consuella, totally nails the tightly wound sexless scientist from the future. You can feel waves of repressed sexual energy flowing from the screen, which gives her more garvitas, as well as Sarah Kestelman, as May, who is sort of the other softer side of the female lead to Connery’s Zed, giving their cliched characters some heart! . This time through, I realized that Rampling is the actual ‘villain’ of the piece if there can be said to be one. Connery’s anti-hero is really the bad guy, if you think about it, but Rampling plays Consuella as arch as Dr. Doom, or Magneto. So much fun to see a woman get a chance to do that in a film. Of course all the villainy in the end is uncovered to be repressed love, ah cliches.

Also John Alderton, as the not so cleverly named ‘Friend.’ The role called for the neutered future male, so bored with being 300 years old, to be a bit of an old queen, but Alderton brings the queen up out of cliche to a kind of fey Eric Idle on Monty Python, sans nudge nudge wink wink. A very under rated performance of a hideous cliche.

I am excited to see a new remastered release coming in just a few weeks. I rarely have much interest in director’s commentary, but I may go back and watch at least parts of the film with commentary. What a fun and gorgeously shot film.

8.5 giant flying stone heads that give you guns and brainwash you outta 10